Toscana di nero, Cavolo Nero, Tuscan Kale, Dinosaur kale or Black kale, call it what you want, but I have a load of it growing and am constantly looking for inspiration and ideas to cook with it.

A few days ago, I decided to experiment and make a kale and potato cake. I steamed both the kale and potato slices until they were cooked through. When they were cool enough to handle, I proceeded to layer a 7 inch cake tin with the wilted kale, and then filled the base with the thin potato slices. Drizzled with a bit of olive oil and seasoning, then folded over the overlapping kale. 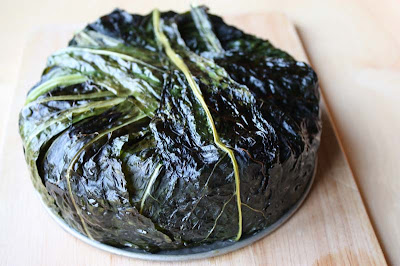 The savoury cake was pretty astounding to look at, that was until you cut into it, and then it just fell apart. I would probably make this again, but in individual ramekins. You could if you wanted too, grate some pecorino or parmesan cheese between the potato layers, but this one was vegan: pure and simple. 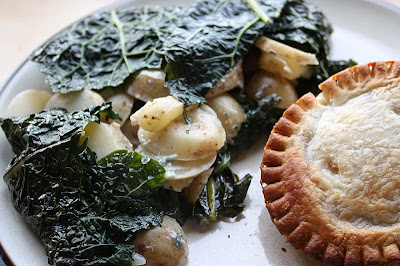 What was interesting about eating this was the kale stalks, although edible, I found them a bit chewy. So after struggling with my knife to cut through the stalk, I decided eat them with my fingers, and in that very moment, whilst gazing at the leafy green still fully intact. I was suddenly reminded of my meat eating days, I felt like I was holding and eating a lamb cutlet off the bone, but I wasn’t, this was a leafy kale stalk. I don’t know what you think, but for me cavolo nero is a meaty and scrumptious leaf.