For those who follow either a vegetarian or vegan diet, seitan sausages may not be a revelation to you, but it may be for some of my other readers.

Seitan is wheat gluten. It is made by washing wheat flour dough with water until all the starch dissolves, leaving insoluble gluten as an elastic mass which is then cooked before being eaten. Wheat gluten is most popular in China and Japan where it was first developed, as well as in the cuisines of other East and South east Asian countries. Over the past few years, seitan has become a much valued ingredient in the West, especially in vegan cookery. It is often used in place of meat in vegetarian, vegan and macrobiotic diets. So it should not be a surprise that has been dubbed as ‘vegetarian wheat meat’.

I’ve made many vegetarian sausages in the past usually with cheese, but never with seitan, namely because I have had great difficulty finding the essential ingredient in the U.K: vital wheat gluten, and when I did locate a place that sold some, it could only be purchased in bulk orders. Having never cooked with it, I just wanted to purchase a small quantity, but the company made that difficult as small packets were hit with heavy postal charges. 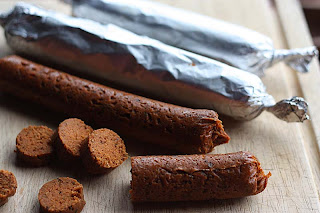 Well my search for vital wheat gluten came to a halt when a big hearted blogger friend posted me a small package to allow me to experiment. The packet has been in my cupboards for a few good months. With D away, I found myself in the kitchen yesterday evening tempted by a Chorizo sausage recipe from Terry Hope Romero latest book Viva Vegan.

I’ve never ever had chorizo – Spanish or Mexican, but as a 'spice head' I have always liked the idea of a spicy vegetarian sausage and have been waiting in patience for one to appear at the health shops, but nothing appeared. This recipe gave me the opportunity to make my own. A lot of ingredients go into making these sausages: vital wheat gluten, chickpea flour, vegetable stock, olive oil and loads of flavourings such as tomato paste, nutritional yeast, garlic, cumin, coriander, oregano, chilli flakes, paprika and cayenne, but it is so worth it. I really enjoyed the mixing and kneading process. The spicy aroma was wonderful, lingering on the palms of my hand like good perfume. Then wrapping them up in foil like Christmas crackers for the final baking process. 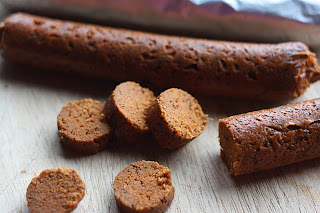 I was so delighted when I took them out of the oven. The sausages looked fantastic. Even I was blown away by how real they looked. I tell you, had I not made them myself I would have been doubting the sausages suitability for vegetarians, not just vegans. It really is hard to believe that these were made without any meat! Not only was it an interesting and exciting culinary experiment (to work with vital wheat gluten), the result tasted absolutely amazing. The chorizo sausage was bursting with spicy flavours and lingered on the tongue afterwards.

On my first bite, I was reminded of my meat eating childhood days. It was very much like Shish or Sheesh kebab, a spicy sausage snack consisting of meat threaded on a skewer and grilled. But the fact is this was a vegan chorizo sausage and it tasted really, really delicious. Oh I have so many ideas of what to do with the chorizo – so watch this space. 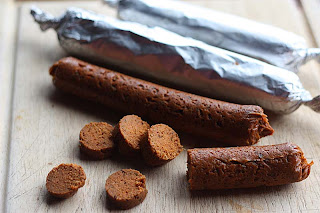 The recipe comes from Viva Vegan, as this was my first time ever playing with seitan, I’ve not tampered with the recipe at all and would have been happy to post it here to share. But out of respect, courtesy and without the permission of the author I am not going to and recommend that you purchase the book. Also you may want to check out Terry Hope Romero here making seitan potato tacos from her book, or check out her site Vegan Latina.

Updated 09/02/2011
I am delighted to report that I have heard from Terry Hope Romero and she has been gracious to permit me to post the recipe here. Knock yourselves out!

Updated 06/2011: This recipe has also been made by Bekkitae of Greenisms.  Please do check out her version of this vegan chorizo, she has written some fantastic information about the ingredients.
Updated 16/02/2012: Made by Vegan in Montreal too.