Tempeh or tempe is a popular fermented soy cake. It has been eaten for hundreds of years in South East Asia, particularly in countries like Indonesia where dishes like Tempe Bacem and Oseng-Oseng are popular. However, in the West tempeh has become a vegetarian and vegan substitute for meat.

I've had sliced tempeh a number of time, normally as part of a veggie breakfast. It has a light yeasty-mushroom flavour. I have to admit I have never really liked it. I have found the texture from the soy beans a little too bumpy and bobbly, but I could still eat it. Unlike D, who would push it to the side of his breakfast plate, the way some people push 'black pudding' off their breakfast plate. He had firmly decided that he did not like it at all. So its not something that features in my cooking.

Last year though when I was in Nairn, looking for something to snack on for lunch I stumbled upon an independent health store and cafe called Sky Delights. On its shelves I noticed some tempeh in glass jars. It was not a brand I was familiar with. The tempeh was whole and looked a lot more substantial. I actually ended up purchasing a couple of jars willing to give tempeh another try. Since then, the jar has been in the cupboard - fortunately still in date. 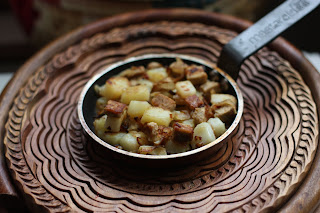 Upon purchasing these jars, I had a number of recipes I want to try with tempeh, but first I wanted to give it the 'taste test'. I decided to keep it simple and made tempeh hash browns for brunch. For those of you who have been reading for a while, will note that Hash browns in various guises have been featuring quite heavily on my blog recently, what can I can - I think I am in need of some comfort eating.

Well the Tempeh hash browns were a hit. Even D who had in the past pushed the tempeh to the side was tucking in big time. The texture of the tempeh was not like those I've had in the past. I also liked the fact it kept its shape well. Serve with beans, tomatoes and a fried egg if you wish with a good dollop of brown sauce. 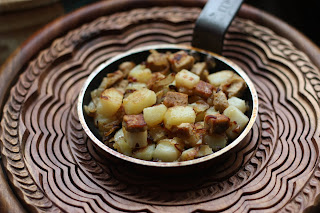 Tempeh hash browns
Serves 2 with accompaniments
Ingredients
2 medium potatoes, diced
2 tablespoons olive oil
1 small onion, finely sliced
Enough tempeh for 2, cut into ½ inch cubes (sorry I don't remember how much weight)
1 tablespoon soy sauce
salt and pepper to taste
Method
Cover the potatoes with water in a pot and bring to a boil. Cook for 10 to 15 minutes, or until tender. Drain well.
In a frying pan, saute the onions until translucent, then add in the potatoes and tempeh in olive oil, stirring frequently to cook all sides of the potato and tempeh cubes. When brown enough, add the soy sauce, salt and pepper to taste.