Did I say I was not going to eat any lazy food, well I guess I’m a fibber then.

After making the vegan chorizo sausages I had to find ways of consuming it. 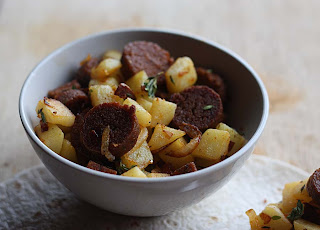 First it was chorizo hash, then Quesadillas. 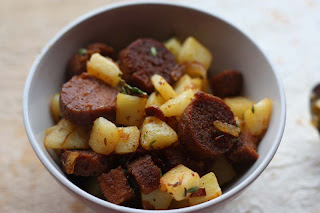 The chorizo sausages sliced beautifully and then upon cooking, they kept their shape well. The spicy flavour of the chorizo sausage infused the other ingredients. It was really good. I have frozen three of the sausages for when D returns, I think its only fair he tries some too. 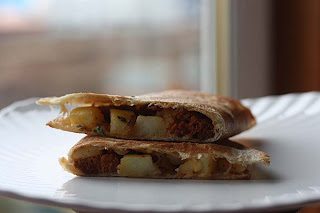 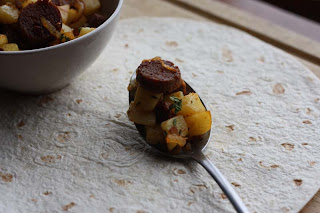 MethodHeat oil in pan, add the onion and cook until soft then add in the potatoes and garlic and cook for about 5 minutes, then add in the chorizo and fry for a further 5 minutes. Mix in the thyme and season with salt and pepper to taste. 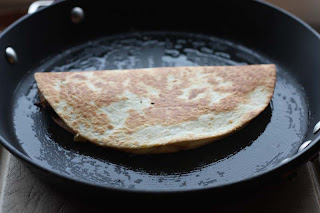 To assemble the quesadillasSpread half of the chorizo mixture on one half of a tortilla wrap. Sprinkle generously with cheese, then fold over so you have a half moon.
Heat a tablespoon olive oil in a wide frying pan, then place the tortilla gently in the frying pan and cook for a minute before flipping over for the other side to be golden and crisp. Serve immediately. Repeat with the remaining tortilla(s). Cut in half and enjoy with salsa. Adapted from Thomasina Miers Mexican Food Made Simple.