One of the things I've been trying to do over the past few months is go through my store cupboards in an attempt to (empty it and) use up some of the ingredients. My store cupboard is an extension of my kitchen cupboards. I have a tiny kitchen that is not able to accommodate my dried goods such as flours, spices, lentils as well as tins of tomatoes, beans and pulses - chickpeas being one of them. I have a lot of chickpea tins in my cupboard. 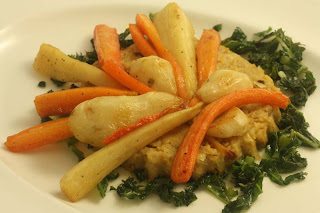 This morning I had also picked up some parsnips and Jerusalem artichokes from the farmers market. So along with the green garlicky kale, these fresh, local and seasonal vegetables formed part of our meal this evening. It was all good, very good in fact.

There is one thing I should mention though, especially if you decide that you wish to attempt these. When I turned the flat cakes out onto the plate, I noted the top was lovely and crisp, but the bottom not so much (see below). So if you wish for both sides to be crispy, I recommend halfway through the cooking process to remove from the tin(s). Flip them onto a non stick baking tin. Coat with a little olive oil and bake further until lightly crisp. I will definitely be doing this later in the week, as I have four Chickpea flat cakes left to consume. These will be good for a mid week working supper. 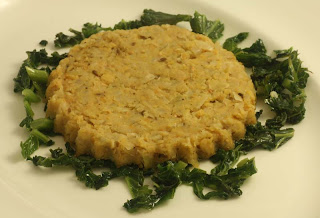 Cumin Chickpea flat cakes
Serves 6 – 8
Makes one 12 inch or 8 x 4 ½ inch round flan tins
Ingredients
2 tablespoons olive oil, plus extra for coating
3 medium onions, finely chopped
4 cloves garlic, crushed
2 teaspoons cumin seeds
3 x 400g cans chickpeas, drained and rinsed
Salt and pepper to taste
Method
Heat the oil in a wide pan, add the onions and cover and fry gently for 10 - 15 minutes. Stirring every now and again to stop from sticking to the pan. Add the garlic and cumin seeds and cook for a few minutes. Remove the pan from the heat and add the chickpeas and some salt and pepper. Mash thoroughly. Adjust seasoning if necessary. 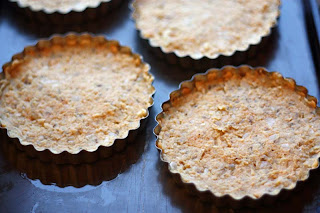 Put the mixture into a lightly oiled 12 inch round loose base flan tin and smooth the top. I actually used 8 individual round flan tins measuring 4 ½ inch. Gently baste the top with a little olive oil and bake in oven for 15 – 25 minutes or until golden – but don’t let it dry. Remove from the oven. Turn the flat cake out of the tin and slide it on to the dish. 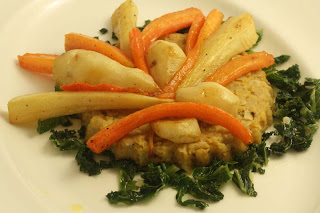 NOTE: If you wish for both sides to be crispy, halfway through the cooking process remove from the tin(s) and flip onto a non stick baking tin. Coat with a little olive oil and bake further until lightly crisp. Slightly adapted from Rose Elliots Veggie Chic. Veggie Chic has also been released in paperback under the title of Sumptuous Suppers.