I cannot tell you how excited I am to get back into growing vegetables again.  Since losing my allotment plot two years ago, I have really missed it.  Sowing the seeds, caressing the little seedlings, watching them grow, thinning/pulling out fresh baby carrots from the soil, picking green peas, the smell of fresh tomatoes, digging the potatoes, the fresh air  - all of it.  I've missed it and am so excited to get my hands and nails grubby once again.

At the weekend, well Saturday namely I had my little army of nephews helping me in out the garden.  It really is true, many hands - albeit it tiny hands make light work.  We managed to clear up part of the garden for pots and seed trays.

Not wishing to be accused of exploiting child labour by them or their parents, they were rewarded with veggie burgers.  Not one, but two which they ravished within minutes.  We also built a cold-frame with a two piece bed frame the landlord was throwing out.  We trimmed off the excess fabric and stapled a couple of layers of plastic sheeting around it.  Not the prettiest looking things to have in the garden, but they will save me £pounds and encourage the seeds to became seedlings.  I will show you the recycled homemade coldframes some other time, when I actually have seeds of try beneath them.  ﻿ 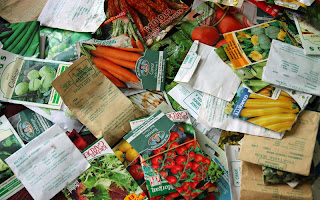 Then yesterday, I tipped out my seed box.  I know some of the seeds will be out of date, but being a bit tight on money these days, I am just going ahead and sowing them and see if they germinate.  There are only a few seed packets I want to get.  I like curly kale and purple top Milan turnips, I don't seem to have them.  I will update my side-bar as I sow the seeds. 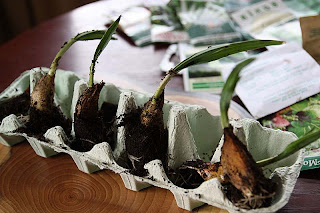 When we drove back to my parents to drop off the little ones, my mother showed me some 'elephant garlic' germinating.  The elephant garlic was given to her by one of my brothers friends.  She said, she didn't know when she would get round to planting it, so gave it to me as she thought I was more organised.  I don't really like elephant garlic, I find it lacks flavour, but I am happy to grow it and try again. 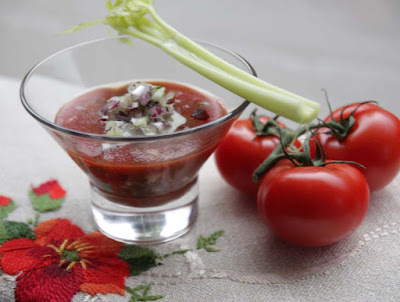