A soup I created this time last year when I was living in Scotland was picked up by New Covent Garden Soup Company for their Suitable for Vegetarians theme.  For those of you who don't know New Covent Garden are one of the largest companies in the U.K that creates and markets fresh soups for the supermarkets.  Fro the past few years, they have been encouraging the public to submit some of their favourite recipe creations.

So may I present to you one of my soup recipes that is being featured by the New Covent Garden Soup Co. for the September month edition.  It is Butternut Squash and Black Turtle Beans with Jalapeno Peppers.  The soup hit the supermarket shelves early this month. 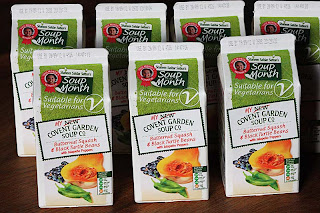 I have to say with work commitments and distractions its all gone over my head and passed me by.  The only people who seem to know about it are family and friends.  Everyone who knows me, looks at me and says the picture featured  on the carton looks nothing like me. Hey what can I say, I can be a little bit of a poser as I did take my specs off for the photograph used on the carton packaging and show rather a lot of teeth. 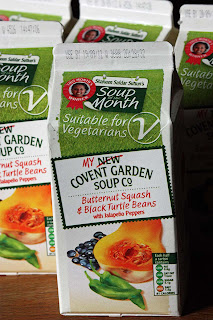 I have displayed some cartons of the soup in the chiller at work both for sale and as means of promotion for the veggie cafe, but to be truthful, having my name on the carton has not brought me : any extra hits on either of my blogs; extra customers to my vegetarian cafe Hunky Dorys; or local media attention.   It truly has come and gone and had I not mentioned it here, perhaps you my lovely readers would not know about it too. Anyway, it's still something to smile about on the inside, I mean how often do you see your name in print and in a positive light?! 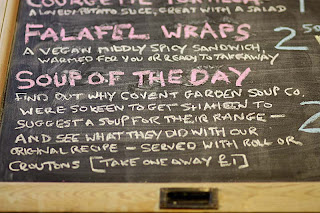 You can find my original recipe here if you wish to make it at home from scratch.  And for those of you who live in South Wales, I will soon be featuring it at the cafeteria.  To read more abotu the soup see here.
60 comments:

Email ThisBlogThis!Share to TwitterShare to FacebookShare to Pinterest
Labels: a little about me, soup recipes

Oh my goodness, the weather has suddenly changed.  Yes of course it is still raining, but there is ice in the air too.  I can soon see my scarves, gloves and fashionable cosy hats coming out of the closet.  To invoke a bit of sunshine into my working day tomorrow on the menu I will have a Caribbean Stew, but back to this rather nippy evening that has got me wanting a mug of hot chocolate.

I finished work at the cafe a little early today as it was very quiet, so thought I would of course take the opportunity to blog a little whilst I have the mental energy.  I also have lots of recipes to share, beginning with this one that is quite popular with my vegan and non vegan customers at the cafeteria - vegan Coffee Cocoa Cake.

There are many days when I have some fair trade coffee left over at the cafe.  I don't like to waste, especially if the cafetiere is more than half full, so I will now and again I will make Coffee Granita or these individual vegan Coffee Cocoa Cakes with its many variations. 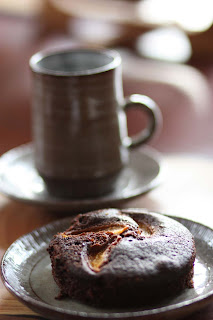 This particular one is topped with fresh apricot slices, bursting against the darkness of the cocoa like golden sunshine. 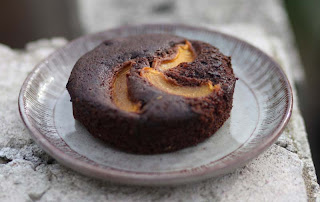 I have also made it topped with pineapple pieces, slices of banana with dark chocolate chips and even rhubarb which D was not so keen on, though the vibrant pink looked pretty petals, but faded a day later.  Surprisingly it is a very light and moist cake. I will post the recipe in the next few days. Right now I think I may just go and have a long bath.

Well, it was rather quite at the cafeteria today, hence the reason I have found a little time to play catch up and blog.

On the daily specials menu today, we had a Thai Green Curry and these individual Paprika Mushroom and Potato Pies that were served with sauteed cabbage and garden peas.  Individual home-made pies sell very well at my little cafeteria, the two runaway successes are my Caerphilly Cheese, Leek and Potato Pies and Garlic, Mushroom and Parsley Pies.  I've also started making Macaroni Cheese Pies too, a vegan variation too. 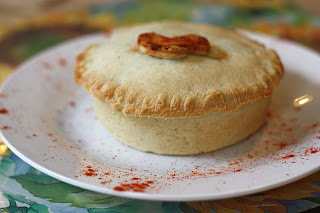 Back to these pies though.  I know I should have sliced into this pie to show you what it looked like on the inside, but this one was not destined for my belly, but for D's working day lunch.  I suppose you can describe this pie a little like a mushroom goulash.  These are very rich, creamy and quite filling would you believe.  And good to eat, warm or cold. 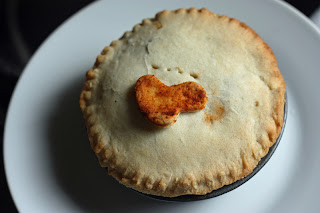 Paprika Mushroom and Potato Pie filling
Makes 6 - 8pies
Ingredients
400g potatoes, peeled and cubed
400g chestnut mushrooms, halved or quartered if large
2 – 4 tablespoons olive oil
1 large onion, finely sliced
4 celery stalks, finely sliced
40g plain flour
2 teaspoons sweet paprika or standard
1 teaspoon dried thyme
½ teaspoon cayenne
400ml vegetable stock
Salt and pepper to taste
Method
Cook the potatoes in salted water until tender, drain and set aside
Heat the oil in a wide pan, add the onion and celery and fry gently until the onion is soft and lightly coloured. Add the mushrooms and cook for a couple of minutes. Sprinkle the flour over the mushrooms mixture, stir until well incorporated, then add the paprika, thyme and cayenne. Remove from the heat and gradually stir in the stock. Return to the heat and simmer, stirring constantly, until the sauce has thickened and smooth. Remove from the heat.  Stir in the potatoes.   Season with salt and pepper to taste.


Thank you so much for those of you who commented on my previous post, it really means a lot to me and moreso that I do still have loyal readers of this much neglected blog.

I would like to say it is because I am busy at the cafe with customers and trade is doing well.  The truth is, yes I am busy but not necessarily because of customers.  I am literally, literally doing everything at the cafeteria myself: the cooking from scratch, the making of fresh salads for the chiller cabinet; and the baking.  Afterall I have to have something to sell if I want people through the door.  Then after that there is the cleaning, the management, stock-taking, ordering, shopping,..  I have a couple of part-time staff who are employed only for front of house during business hours, but when they are gone I am still working away clearing up and cleaning up and then preparing for the following day.  Its like being on a permanent conveyor belt.  The bums on seats part is still way off, I find Fridays for a few hours the busiest of days, even Saturdays are a bit of a slump.  Saying all this, I am enjoying it and I have learned so much in such a short space of time, but there have been and are some downs that I will share with you maybe later when they have been sorted out.  I found August a month of anxiety and September has begun with some stress and its only the start of it, so feel a little disheartened.

Okay before I go and enjoy the rest of my Sunday, I thought I would share a recipe I made a little while ago for a Summers evening.  Its just a simple Cherry Tomato Tart. 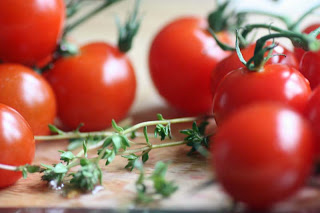 I would love to say that these are made with my home made tomatoes, but sadly not.  Regardless this still tasted pretty good. 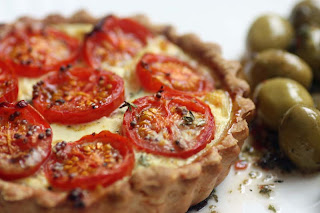 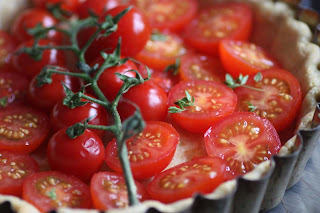 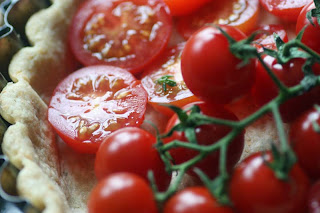 Method
Heat oven to 180C/fan 160C/gas 3. Blitz the flour, butter and cheddar in a food processor until the mixture resembles breadcrumbs, then add the egg and blitz until it forms a ball.
Lightly dust a cool surface with flour and roll out the pastry. Line a 20cm- 24cm loose-bottom tart tin with the pastry, then chill for 10 minutes. Line the pastry case with greaseproof paper, fill with baking beans and bake for 15 minutess. Remove the paper and baking beans and continue to cook for a further 10 minutess, then remove from the oven.
Arrange the tomato halves in the pastry case.   Sprinkle the thyme over and season with ground black pepper. Mix together the grainy  mustard, milk and eggs and pour over the pastry base. Return the tart to the middle of the oven and cook for 30 minutes. 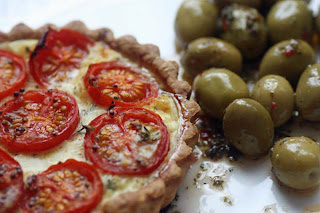 I am sorry to say that my growing antics have been stalled because of work commitments that has totally taken over my life in every aspect.  I am up most days at 6am and back home at 10.30pm.  I really don't find a moment to myself, except surprisingly today as plans to go out somewhere today did not go ahead.  So I thought I would commit a little time to my much loved and recently neglected blog.

I do have a lot to share - some highs and lows, but today I will just give a little up-date.  Firstly regarding the garden vegetable plot and what I had planned to grow this year.  Early this afternoon, I hovered in the garden for about 40 minutes, pulling out weeds and my goodness there are so many of them.  I barely harvested my own homegrown broad beans which have turned black like tamarind pods and everything else such as the brassicas, the pods and so on, never got transplanted into its growing space, except for the tomatoes many of which are still green and baby carrots in hanging pots. and some blueberries that I have frozen  Everything else has spurted or gone to the slugs of which there are many here, due to the wet summer rain.  I am really disappointed and totally gutted as I was so excited to have begun growing again and so looking forward to some homegrown produce, especially the likes of Rainbow Chard.  Also the seeds sent to me with much love and heart by some garden friends have been lost to the slugs due to work distractions. I hope my garden friends will forgive me.

Onto cooking and baking: well as you can imagine I have been cooking and baking a lot, especially as it is now part of my new accidental career. I have made lots of salads, sorbets, pies, pastries, savoury and sweet tarts and plating them up beautifully, but sadly I have not been getting round to taking photographs and sharing the recipes with my much loyal readers.  However, here is one recipe I have been making the past month, pretty much on a weekly basis and that D managed to snap a picture for me a couple of weeks ago.  It is Rhubarb and Rosewater Bread. 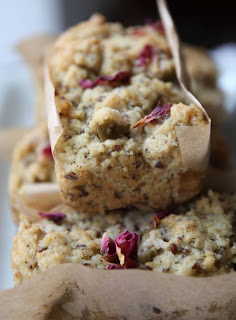 I have been making individual loafs.  You can find the recipe here if you wish to make it home.  It really is a lovely cake.  Almost like a digestive biscuit cake. 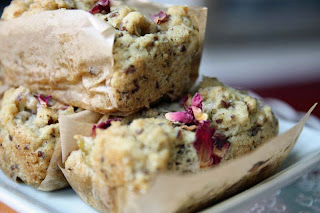 Well I hope not to leave it to long for the next time I blog.  I do have lots to share, but maybe next time.  I off now to spend a little time today to play catch up on some of my blog reads.
35 comments: