Refugee Week is often celebrated between 2- 26 June. It is a unique event as it brings people from all backgrounds together to highlight and celebrate the contributions that asylum seekers and refugees make to the U.K.

The theme for Refugee Week for 2016 is Welcome.  Throughout this week, my Simple Act through my blog has been to Cook A Dish from Another Country and try and raise some awareness of that particular country through its cuisine.

Today I will share some vegetarian and vegan Eritrea plates, but before I share the recipes, I'd like to begin by admitting that I had never heard of Eritrea until the refugee crisis.  Eritrea's neighbour Ethiopia had been imprinted on the memories of many thanks to Bob Geldof's  'Feed the world' campaign; but Eritrea a small country in the Horn of Africa was to come to our attention in the mid 1990s when many vulnerable asylum seekers and refugees from Bosnia, Iraq, Afghanistan and  Eritrea were being dispersed across the U.K.

The UNHCR estimates that 5,000 people leave Eritrea every month and account for the largest group of people applying for asylum in the UK.


An asylum seeker is " A person who has left their country of origin and formally applied for asylum in another country, but whose application has not yet been concluded ."

Sadly I have met more Eritrean asylum seekers and refugees in my life than from any other background; and many have made the treacherous journey across the Mediterranean.

One of the reasons Eritreans are fleeing is forced military conscription, not just young men, but also the elderly and this often results in forced labour.  What should last 18 months is indefinite, lasting decades.  If you do not uptake, then the consequences are arbitrary detention and often torture for the individual and his family.  Many Eritreans have described Eritrea as a Totalitarian state comparing it to North Korea.  Amnesty International are calling on Eritrea to end the system of indefinite conscription into national service and to recognise it as a human rights violation. 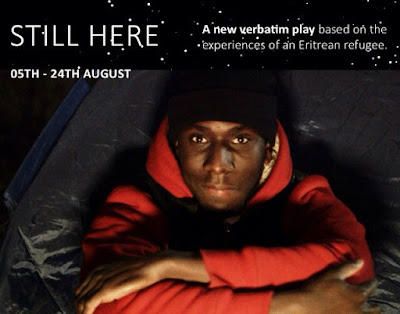 The Theatre for Justice in association with the Bristol Old Vic Theatre School are 'committed to creating exceptional works on the theme of social justice'  Something that I am personally very passionate about.  Theatre for Justice's 'vision is to establish s network of theatrical pioneers who are passionate about giving a voice to those who are silenced'.    They will be showcasing a play called 'Still Here' based on the experiences of an Eritrean refugee. See the Trailer HERE.   Still Here will be premiering at the Edinburgh Festival in August 2016.

Now onto food - before starting this blog, I only had Ethiopian - Eritrean cuisine twice in my life.  The first time ever was in 2000, when I went to see my best friend Leah in the US.  She took me to an Ethiopian restaurant.  The second time was when I lived in Scotland and I cooked the entire Ethiopian-Eritrean Menu that was featured in Celia Brooks World Vegetarian Classics cookbook (2005).  I was inspired to make everything from scratch, the Berbere Ethiopian Hot Spice Blend, the Nitteh Kibbeh - Spiced Clarified Butter and the Injera - Sourdough Flatbread,  following the whole fermenting process that took a days.  On the menu wasYe'atakilt W'et - Spicy Mixed Vegetable stew, Yedifin Miser Alicha We't - Mild Lentil Stew with Basil and Yeshiro We't - Stew of Spiced Powdered Chickpeas. 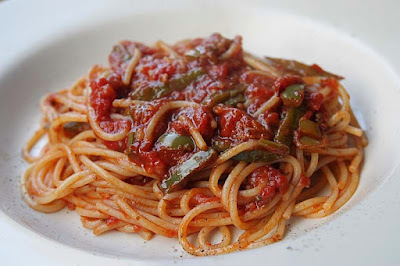 In the same cookbook that I stumbled upon Eritrean Zigni Spaghetti - Noodles with Hot Sauce.  I wasn't quite sure about it assuming it was more of a recent fusion recipe, but a few years later when I was volunteering for Venture Scotland on a camping trip to Glen Etive, Scotland I asked some of the participants who happened to be from Ethiopia and Eritrea about Zigni Spaghetti , they confirmed to me that this pasta dish indeed actually existed.

Spaghetti Zigni hails back to the 1930s when the Italians tried and failed to colonise Ethiopia, however they did  leave behind culinary influences.  Zigni Spaghetti was one of those influences. 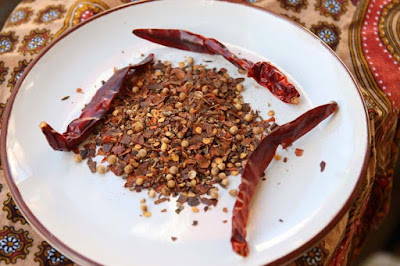 Zigni is essentially pasta coated in a deep rich tomato sauce enhanced with the highly spiced Berbere blend.   Berbere in Amharic means hot.  Berbere is a Hot Chilli Spice Blend that is essential to many Ethiopian and Eritrean dishes .  Its become one of my favourite spice blends. 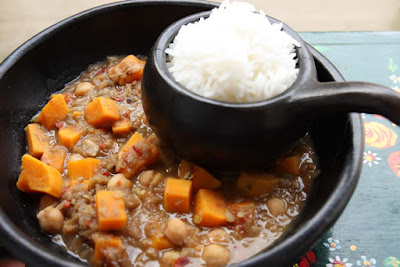 I followed a recipe for Spicy Lentil Misir W'et (Stew) that came from Ethiopian cook, Alemtshaye Yigezu.  For the recipe, follow this link. The only thing I did in addition was add both sweet potatoes and chickpeas to the dish, nothing more. 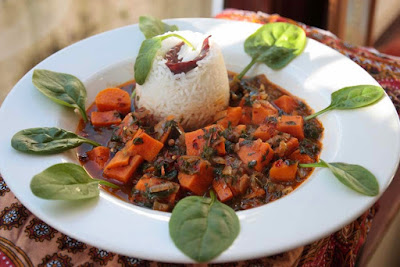 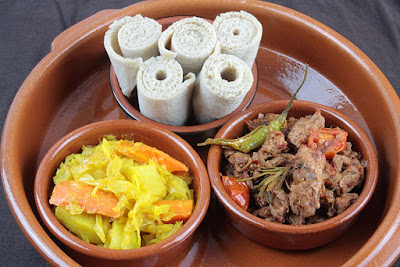 Ethiopian Supper of Tibs 'Soya Beef' with Berbere and Cherry Tomatoes and Caramelised White Cabbage, Carrot and Potatoes. adapted from Mazi Maz in The Guardian. 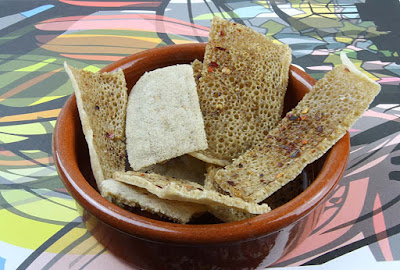 Not authentic, but as I had some Injera - Sourdough flatbread left over from a meal, so made some Injera crackers.  I am still waiting for an Eritrean acquaintance to show me how to make Injera from scratch, watch this space!  Please check out this short film made by the BBC showing One Child's Journey from Eritrea to England.