This is my first attempt at making paella. Paella is a rice dish from Spain that has become very popular with Brits in the U.K. Paella is not a dish I would have ordinarily attempted, namely because of the 'meaty' ingredients, but it was at my nephews request that I make a vegetarian version of paella when his Uncle returned home. I did not wish to disappoint him, so this is what we had this evening: Vegan 'prawns' and seitan chorizo paella. 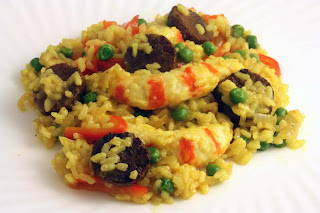 I know purists will be disappointed. For a start, I have not made it the authentic way using a paella pan, then I have missed out one of the essential ingredients - saffron strands that give the dish its golden colour (simply because I did not have any to hand). To add to this, I also veganized the dish and let me tell you it was good. The paprika and turmeric gave the dish its reddish colour and flavour. The last of the seitan chorizo gave it warmth. For those of you interested, I purchased the large vegan prawns from a Chinese supermarket in Glasgow. The vegan prawns are made from seaweed extract, gluten wheat, salt and spices. D repeated what he said once before about the vegan prawns that 'they tasted more like prawns than prawns did', this time my nephew agreed too.
The paella certainly was a complete meal in itself, no accompaniments required – perhaps a glass of red wine though. 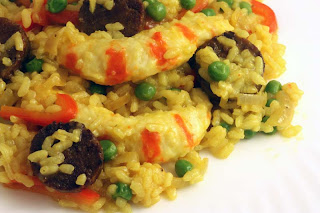 Vegan ‘Prawns’ and seitan ‘chorizo’ paellaIngredients
Serves 42 tablespoons vegetable oil
1 onion, finely sliced
1 red pepper, cored, seeded and sliced (from Spain)
200g seitan chorizo. Recipe from here, sliced
1 tablespoon vegetable oil for shallow frying
1 ½ pints vegetable stock
½ teaspoon paprika
½ teaspoon ground turmeric (or a few saffron strands, if you have them)
200g long grain rice (I purchased some labelled as paella rice, but I think any long grain rice would have been fine)
Packet of vegan prawns, thawed if frozen. The packet contained 250g
100g frozen peas
Salt and pepper to taste
MethodHeat the oil in a large frying pan and cook the onion until softened and golden. Add the red pepper, garlic and rice and stir fry for a couple of minutes. Then add the paprika, turmeric (or saffron) and stock, bring to the boil and simmer for 12 - 15 minutes.
Whilst the pot is simmering, in a large frying pan heat 1 tablespoon oil and add the sliced seitan chorizo, cook for a minute on one side before flipping over and cooking on the other side. Turn off heat and set aside.
Stir in the prawns and peas into the simmering pot and cook for a further 5 minutes, until the rice and vegetables are tender. Stir in the seitan choizo and season to taste, then serve immediately. Recipe veganized from Ainsley Harriots Gourmet Express 2.