Now any tourist who has had the joy of ordering a full English or Scottish fry-up breakfast will have seen their plate embellished with a burned piece of disc known as black pudding, this normally gets pushed to the edge of the plate. This is not unusual, alongside jellied eels and tripe, the black pudding is reputed to be one of the least palatable dishes amongst us British. Black pudding is a fat, round sausage-like product. It is traditionally made from fresh blood, pork back-fat, oatmeal, barley, flour, rusk, onion and a blend of herbs and spices. 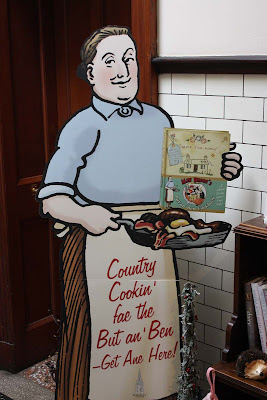 So you can imagine my surprise when I learned in 2006 that a Vegetarian Black Pudding had been launched by The Real Lancashire Black Pudding Company's. Now the vegetarians amongst us may have felt a bit smug that something had been invented with our diet in mind, but the truth was the ingredients of fresh pig’s blood and ox intestines in a black pudding put off even the most hardcore of carnivores, so the aim of the inventor was to create an alternative that would win back this squirming audience.

In an interview the company's owner, Andrew Holt, explained how he substituted the meat components of the pudding, namely the fat, blood and ox intestines. 'We tried to make a liquid which would simulate the properties of blood and get the right colour as well. We used beetroot and caramel for the colouring, with GM-free whey and soya powders for the protein'. Just reading that made my stomach turn, anyway, the feedback received from regular black pudding connoisseurs and celebrity chefs was that the 'V Pud' was very similar in taste to the real stuff. 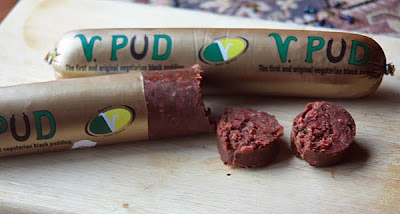 Many of you will be interested to note that The V Pud is approved by the Vegetarian Society in the U.K. I know many vegetarians and vegans, who have made a conscious choice about their diet, will be bewildered as to why would a person who prides themselves on eating vegetables would even consider buying something specifically created to resemble meat. But at the same time, I know of many vegetarians and vegans, including myself whom have products on their plate which impersonate meat such as: seitan (wheat gluten) meatloaf; tempeh bacon, TVP meatballs, Quorn ‘chicken’ or Tofu Turkey, as was the case over Christmas. I have even come across a vegan version of black pudding by Linda Majzlik's. The truth of the matter is that many vegetarians and vegans object to the rearing conditions of the animal, not necessarily the taste or texture.

I consider myself an adventurous diner (as long as it is suitable for vegetarians), so after years of ignoring the 'V Pud' – Black pudding in the refrigerated section of specialist shops, I finally succumbed primarily out of curiosity. As with most of these products, the ingredients are a guarded secret, but the 'V Pud' does contain wheat gluten, beetroot powder and some milk products. I found it soft, moist, a little oozy with a powdery aftertaste. It is not particularly spicy and has a flavour of its own, something that I cannot compare. Would I purchase the 'V Pud' again? Yes, I think I would and perhaps moreso as a talking point for when friends and family were over, for the novelty factor of a vegetarian Black Pudding (much in the same vain as the Macsweens vegetarian Haggis which is more popular than the 'real' haggis). 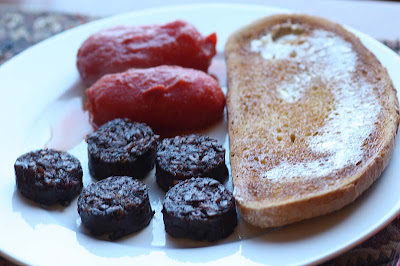 So that you know, this particular vegetarian product is being sold by large meat-based company whose focus is not the vegetarian’s diet, but a marketing strategy. Perhaps this 'vegetarian' and 'vegan' dietary gap should be redressed by a small business that wholeheartedly has vegetarians and vegans in mind. But I fall in between these two as I think we should praise the forward thinking of these companies. These companies are in an influential position to mainstream vegetarian products; and by doing so encourage other large companies to produce quality vegetarian and vegan alternatives.

I know this vegetarian black pudding does not contain an ounce of fresh vegetable, however I am a firm believer that vegetable based dishes should be made available to everyone who wishes to try it, not just those who choose to wear the labels.

To end, have you tried 'V Pud' black Pudding? If not would you? I would love to hear from you.