and 'no' I am not talking about an emotionally, sensitive friend called Joe. A sloppy Joe is an American dish made from minced beef, onions, sweet rich tomato sauce and other seasonings, served on a hamburger bun.

I have mentioned it before, but D is demi-vegetarian by association. He is quite content with what I feed him, but now and again he craves for a bit of texture. I am not one into mock meat substitutes, but occasionally I will make something that imitates say meat such as mock 'meat' balls or Glamorgan sausages mainly for him.

A couple of days ago, he wanted something with a bit more chew. I remembered I had some Textured vegetable protein, TVP for short in a jar from the 'meat balls' and 'vegan Kievs' I made last year. I also had a couple of recipes marked in two different vegan cookbooks using TVP, but one stood out: Sloppy Joes, so that is what I decided to make. 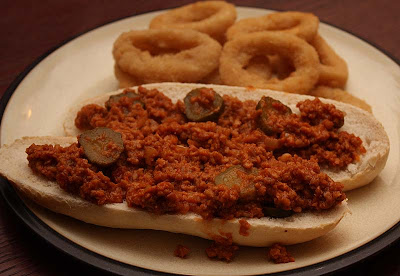 D lived in the States for a couple of years, namely in a place called West Virginia and has eaten the real meat version of Sloppy Joes. So I looked to him for his verdict.

How’s it compare to the real thing?!
His response, it could be a bit more sloppier but it’s a pretty good vegan sloppy Joes substitute.

He was right the TVP I used seemed to absorb a lot of the juices, so my sloppy joes, was not as sloppy as expected as the title suggests. But I was pretty pleased to note that it was not far off.

We’ve had vegan Sloppy Joes twice this week. Once with with crusty bread and onion rings and secondly with home-grown, frozen peas and roasted potato cubes. 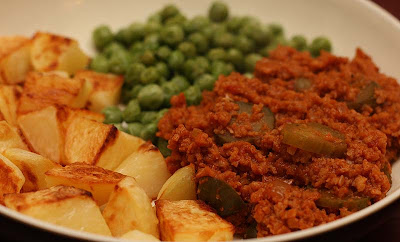 I followed the recipe from How it all Vegan pretty much word for word. But because flavoursome tomatoes are out of season, the only thing I did different was blitz half a tin of chopped tomatoes and 2 tablespoons of tomato puree for the sauce. I used the remaining half a tin in place of the 1 tomato.

I actually think you can actually use the Sloppy Joes as a pie filling, as it reminds me a bit of Cottage pie.