You may recall I harvested a load of 'golden apple' squashes from my allotment plot last year. Well I still have a load of them dotted decoratively around the flat, including these prettily displayed in a vase. 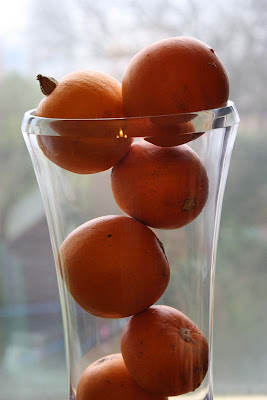 I decided to make some more muffins with them, but these ones were slightly different from the Squash cheesecake muffins that I've made in the past. I think these are much easier to put together, as you don't have the bother of roasting and pureeing the squash, these simply needed to be peeled and grated it raw.

These are not the high tower muffins, but little spongy ones. You can top with some cream cheese, but I don’t tend to as I think the majority of muffins I make are sweet enough. The flavour of these reminded me of Indian style halwa which is made with semolina: grainy and a little sweet, but not overly. 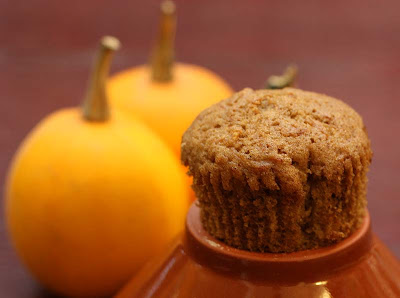 Now what to do with the other twenty 'golden apple' squashes...

'Golden Apple' Squash Muffins
Makes 10 - 12
Ingredients
100ml sunflower oil
110g soft light brown sugar
2 eggs
110g self-raising flour
1/2 teaspoon baking powder
1/2 teaspoon bicarbonate of soda
1 teaspoon ground cinnamon
1/2 salt
Squash, peeled and seeded, then grated weighing about 140g
40g raisins or sultanas
Method
Preheat oven to gas mark 5. Line a tray of 12 muffin tins with paper cases. Whisk the oil and sugar together and beat in the eggs one at a time until the mixture is well combined. Sift the flour with the baking powder, soda, salt and cinnamon. Fold into the mixture together with the dried fruit and grated squash. Combine well and spoon into the muffin cases evenly and bake in the centre of the preheated oven for 20 - 30 minutes until risen and firm when pressed lightly. Adapted from the Leiths Vegetarian Bible which uses pumpkin.