A few days ago there was a BBC Scotland documentary on the Buckfast. Surprisingly that evening and the following day, I got a number of hits on my blog entry for Buckfast cheesecake. Those of you living in the U.K and more specifically Scotland, will have heard or read of this drinks alleged association to crime among adolescents.

I’ve already written a bit about my thinking on the alcoholic drink, so don’t want to do so again, but I would like to add one thing. I think it is unfair to blame a particular brand of drink, as individuals should take responsibility for their actions and not say ‘ooh Gov it was the drink, without it I am any angel’. Yeah right. I hear that pathetic defence so often, when violent partners attack their partners - it was the drink, when racists verbally or physically attack those who are visibly different from them - it was the drink or when someone stabs someone for supporting the rival football team (this actually happens in Glasgow), it was the drink. The one flaw with this drink and many like it in my opinion is that it is affordable, just like like cider and that is why you see empty bottles of it rolling about on the grounds of parks where children should be playing, or side streets of Glasgow. It makes me so angry when people do not take some responsibility for their actions. 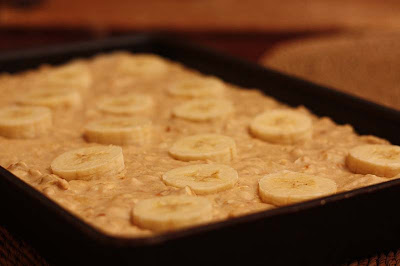 Now onto some baking I did over the weekend, you may remember I made these delicious banana, peanut butter and oat muffins. Well I decided to make them again, but when I went to line the muffin tin with muffins cases, I realised I had none. So I poured the mix into a tray bake and decorated the top with banana slices, thinking it would be alright.

I was so wrong. 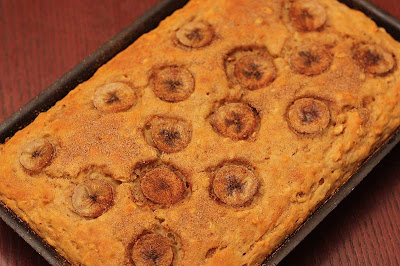 Ugh, Baking them this way made them turn out like canteen ‘out of the packet’ cake batter mix. Although they look pretty good, the cut up squares were not nice at all. D eats most things and even he turned his nose up at these baked this way. 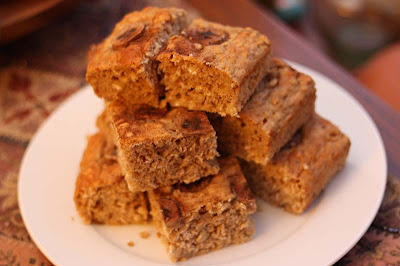 They did not go to waste though, and no I didn’t fob them off onto work colleagues. Much worse than that, depending on your viewpoint, I gave pieces to the birds in the garden, they’re not as fussy as me.