‘Let’s fight the filth with forks and flowers’. I like this. It is so heart-warming and makes me smile.

Last week, whilst channel hopping I stumbled upon a Food show on one of the satellite channels on which renowned Guerrilla Gardener Richard Reynolds was appearing.

Guerrilla Gardeners also known as Green Guerrillas are radical and political gardeners. Guerrilla Gardeners take over an abandoned piece of land which they do not own and plant trees, sow seeds or plant a new vegetable patch. Guerrilla gardeners use a form of direct action to reclaim neglected and derelict land so that it develops a new positive ‘green’ identity. This renewed place is beneficial not just to the surrounding wildlife, but impacts on the behaviours and moods of people. Some guerrilla gardeners carry out their work at nigh in secrecy. Others work more openly, directly engaging with members of the local community and local council to sow seeds, plants and crops.

Richard was on this particular show to share the work of the Guerrilla gardeners around the world, promote environmental awareness, and how we as individuals can play our small part. He was also on the show to showcase these fantastic green seed bombs. 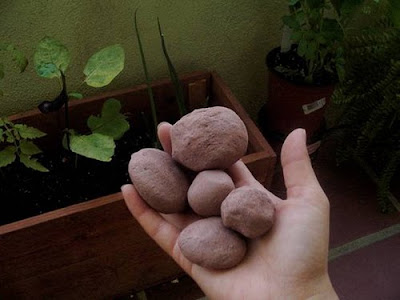 The green seed bombs are actually little capsules made from recycled materials, organic compost and fertilizer. Each is implanted with wildflower seeds indigenous to that region. These seed bombs have been designed to be thrown into dull and neglected places in the city and brighten that space not just for the human eye, but also for the wildlife, especially the bees and the butterflies. All that is required is a little helping hand from mother nature in the form of rain and then the seed bombs self-destruct (a bit like MI technology) or should I say be more poetic and say, they disintegrate and become one with nature.

This ‘seed bombs’ initiative of creating and greening the city was originally pioneered in New York in the 1970s, when environmentalists filled condoms with seeds, water and fertilizer. This initiative is still going strong in some parts of the States, as well as Australia. If you check out Richards blog, you will see that it has even impacted on other counties. 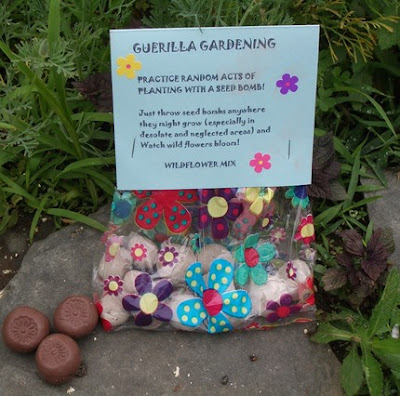 Anyway, I was well impressed with the ingenuity of these seed bombs. The seed bombs are cheap and easy to make. I would have be happy to give you the recipe, but thought it was better to give you this link where Richard demonstrates how to make these from scratch. 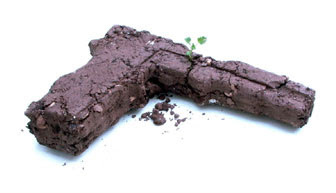 If you don’t want to get your hands grubby, you can also buy these seed bombs in the shape of petals, a pistol. 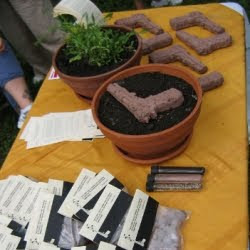 as well as aesthetically pleasing ones such as an Opium plant and even a grenade bomb. I read that the grenade seed bombs were moulded from old newspapers and teabags in which seeds are both implanted as well as contained within its hollow core, so they rattle a bit when you shake them. The kabloom grenade shaped seedboms were launched by Scottish Guerrilla Gardener Darren Wilson last year. As much as I like them, and I really do, I would like to advise you that they cost around £9.99 for a pack of four. So I would strongly recommend making your own and getting your hands dirty, especially as it is something that is going to disintegrate into nature.

Thanks to Richard Reynolds I will be making some’ loopy’ lupin and ‘nasty’ nasturtium seed bombs this year, or will that be naughty of me - you know the reputation nasturtium seeds have. 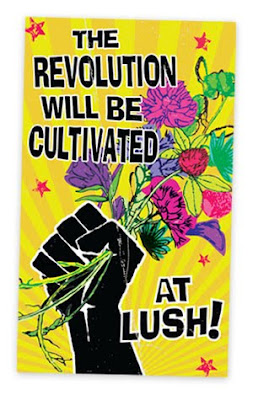 Ah if you still want the recipe Lush USA have got a quirky poster for it. Just follow this link. PLEASE NOTE: Images in this post are not mine. If i've done it properly, you should be able to click on the images for the source.