Finale of the Fennel

The finale fennel at the allotment was starting to bolt. So I have pulled them all out, except for one that was starting to flower. I decided to leave that for the flying wildlife, but also for it's architectural beauty.

When fennel is as fresh as this, the best you can do is eat it raw. Look papa, it's all raw and vegan. I know this fennel salad don't look like very much on the plate, but it's the taste that really matters and this dish really is full of flavour that you will want to serve it alongside some plain boiled potatoes. This is a refreshing and clean-tasting salad. 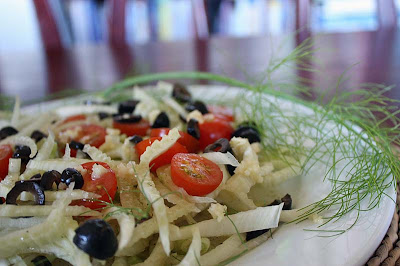 I am submitting this to Chriesi from Almond Corner who is the host for this weeks weekend Herb Blogging (WHB) #201. Chriesi has a lovely food blog accompanied by beautiful photography. The weekly food blog event showcases information and recipes about herbs, vegetables, fruits and other plant ingredients. Weekend Herb Blogging was first initiated by Kalyn of Kalyn's Kitchen. It is now organized by Haalo of Cook (Almost) Anything At Least Once. I was going to write about the fennel herb which I have used in this recipe, but thought I would focus on the herbs big sister: the Bulbous Florence fennel. Anyone who has eaten fennel, will tell you it is an acquired taste. It's one of those vegetables you either love or loath. I am in between, I just like it, but that wasn't always the case. My experience of fennel came in two ways. as fennel seeds appearing in various spice dishes, but also as gripe water, given to babies and children when they had a delicate stomach. Ooh the memories that brings back from my childhood.
Florence fennel is a magnificent plant. Very impressive with it high, swaying, feathery fronds. Here is my nephew showcasing them. The vegetable fennel is a round, compact, bulbous curvy plant. There are two types. The bulbous is the female and the slender one is the male. Yes, the fennel has a gender, who would have thought it. It is also known as finocchio.
Fennel is not used very much in British cooking, but there has been some interest in recent years. We are now seeing fennel appearing on menus at restaurants and numerous cookery shows showcasing it's versatility. Unlike the British, the Italians and French are rather fond of this stem vegetable.
Florence fennel has a strong aniseed and liquorice taste. It is reputed to be both a digestive and a diuretic. Fennel can be eaten raw as long as it is sliced thinly. The fennel keeps it shape very well, so it can be also blanched, braised, roasted, griddled, barbecued and in a gratin. It can also be made into creamy soups. I have even seen cookery shows where chefs have made candied fennel. So it is quite versatile.
Fennel with black olives and tomatoes
Serves 4
Ingredients
1 - 2 fennel, fronds and tough bit removed
1 fennel herb frond
300g cherry tomatoes, halved
2 garlic cloves, crushed
60g black olives, stoned and thinly sliced
For the dressing
2 tbsp white wine vinegar
4 tbsp good olive oil
salt and pepper to taste
Method
Slice the fennel lengthways into thin slices, don't worry if the fennel falls apart. Pour the mixed dressing on top and the minced garlic. Leave to marinate for at least an hour. When ready to serve give it a mix then scatter over the tomato halves, black olives, garnish with fennel herb and serve.