Hills of Fife and the Pillars of Hercules

The allotment committee couldn’t be bothered to have an open day this year, so instead of enjoying the fruits and vegetables of fellow allotmenteers, we decided to go to Falkland in the Kingdom of Fife, where Pillar of Hercules were having an Open Day. Pillars of Hercules is an organic farm with both a shop and café. I had been there once before, well before I got my plot and quite liked it. Falkland is just over an hours drive from where I live and the weather was brilliant, so we made the most of it. 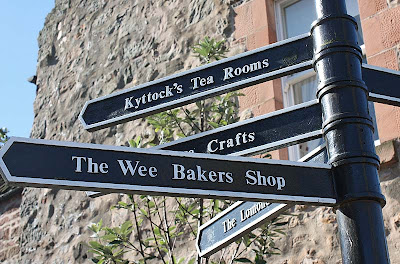 Well my first picture had to be food related didn't it. How cute is that?! 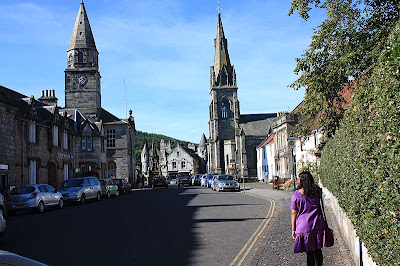 Falkland High Street. Falkland has won numerous awards for being the most beautiful place in Scotland. I can see why people fall in love with Scotland, its a different world from the cities of Scotland. 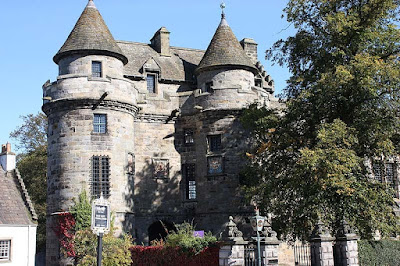 Falkland Palace in is a former royal palace of the Scottish Kings. Today it is in the care of the National Trust for Scotland, and serves as a tourist attraction. 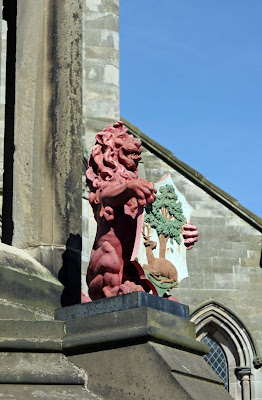 The village's coat of arms shows a stag under an oak tree this was in the centre of the High Street. 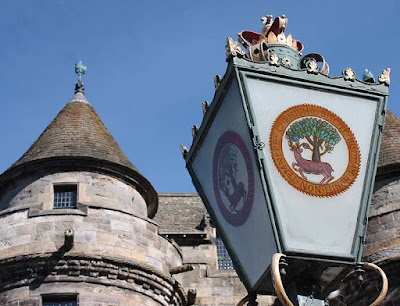 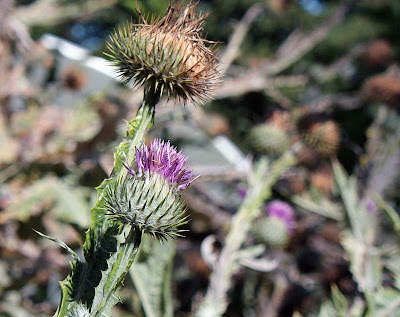 Scottish thistle in its many forms. Now onto Pillars of Hercules. Yes before I go any further you are probably wondering 'why on earth is it called Pillars of Hercules?', well the owner of the 24 acre farmland Bruce says don't ask, so I won't. 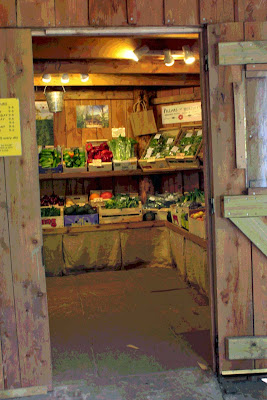 This is the entrance to the organic farm shop, selling vegetables, fruit, free range eggs, grains, pulses and eco-friendly household products. I found out that they had a Veg Box Service. I bought a couple of cucumbers and pulses: black turtle bean, puy lentils and aduki beans for the coming winter season. 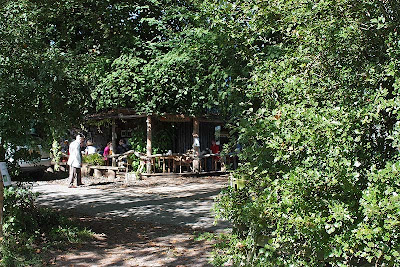 We had a coffee and a bean burger at the vegetarian cafe which in it's style was both urban and rustic. Urban because it was selling city style expresso shots, and rustic in its surroundings, the furnishings were all hand-made and out of reclaimed wood. As we left the cafe I noticed some leaflets had appeared on the tables from the Fife Diet. 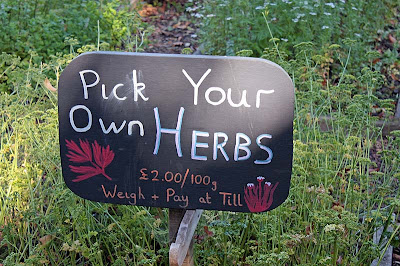 We took a slow wander around the farmland. 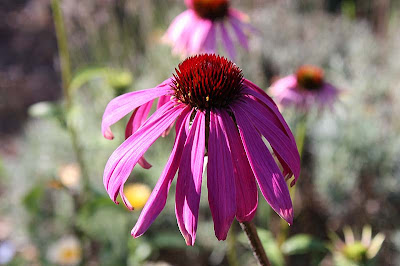 I remember purchasing an Echinacea plant from here about 3 years ago, I was optimistic about it growing in my garden at home, but it never did. This time I decided to just admire them. 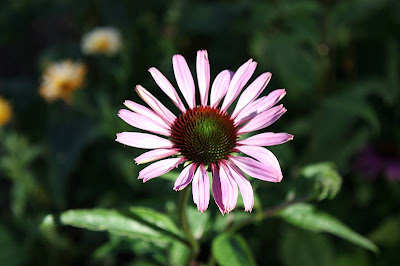 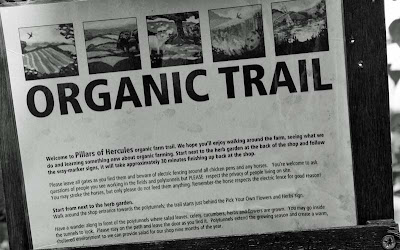 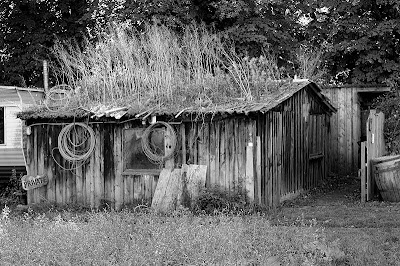 Is it me or is this building looking at me with its crazy hairdo?! 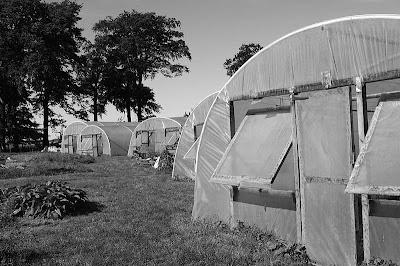 I hope they didn't mind, but we also took a gander in some of their polytunnels, I saw some plum tomatoes and various salads. I think I also saw some parsnips growing in one of the polytunnels, but I am no 100% sure. 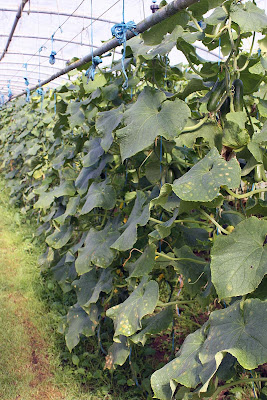 There were also some cucumbers. Seriously look closer. 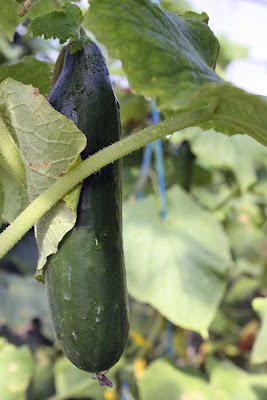 You can see why I bought a couple. 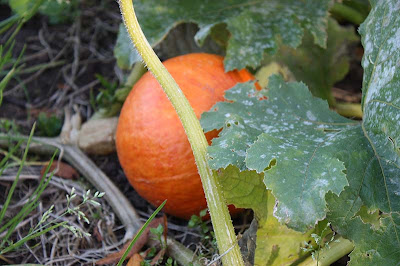 Then we decided to stretch our legs a bit further and explore some more of the farmland. I saw these lovely pumpkins turning that brilliant orange, not long before it's ready for harvesting. 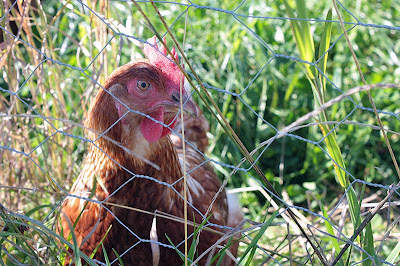 We stumbled upon the chicken run. This hungry one or should I say greedy one came up to see if we had any grains, but then guess what happened... 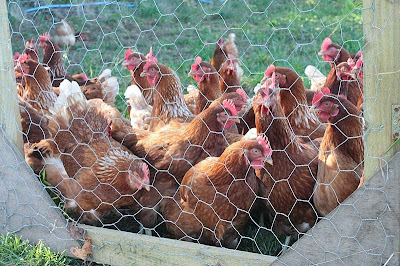 The rest of her pals followed. Nothing like following the leader. 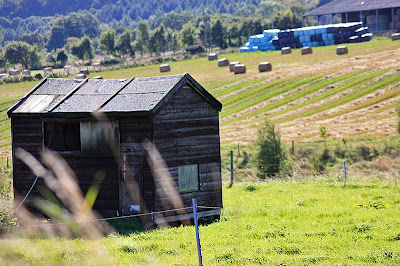 It's not often we get sunny days like this in Scotland, so I couldn't resist a few arty pictures. So please just humour me. 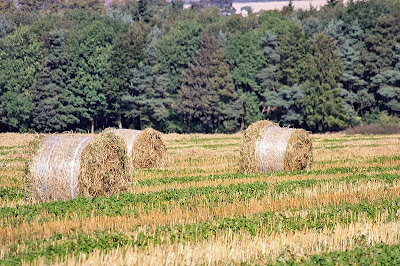 I just love the natural colours. 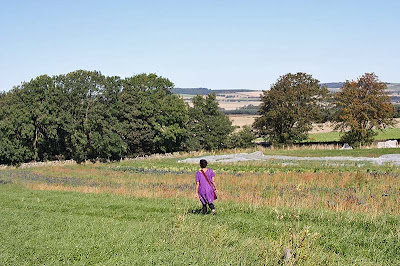 Here's me in an idyllic setting. 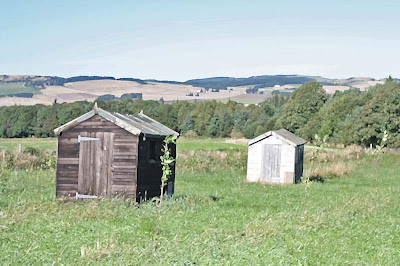 Looks like a scene from 'Days of Heaven' or am I thinking of another movie? 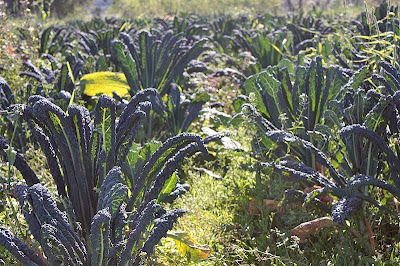 I was pleased to note that the Pillars of Hercules vegetables were at a similar stage to mine. For example, look at this cavolo nero or black kale, ahh this could be my backyard, but it not. I would never be able to fit so many in my garden plot. 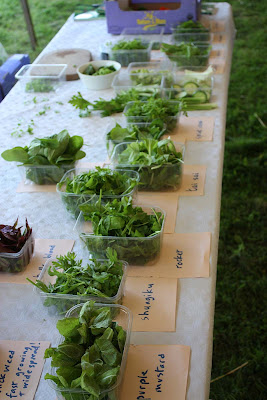 Back to the main area where the open day was taking place, their were some food demonstrations, music, the essential bouncy castle for the children, veggie burger stall, crafts stall and some free food tasters. I tried a lovely pumpkin chutney but decided not to buy any because I would be making a load of my own. We also stopped by this stall, where a lovely lady was giving people a chance to taste some wild weeds and salad leaves. A very good idea! 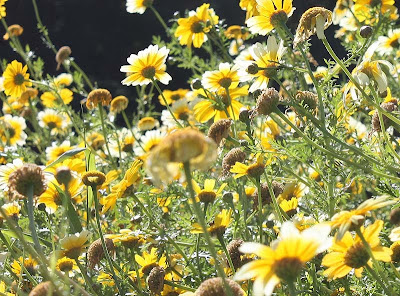 Ah what a lovely day, now it was back to the West of Scotland. 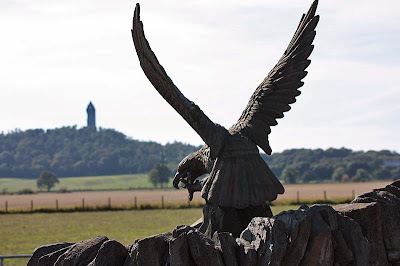 We did stop one more time at the Coffee Bothy at Blairnmains farmshop where we had some scones with cream and jam. This is a lovely shot of an eagle I think, but look in the distant - you will see the Wallace Monument. Okay that's me calling it a day as your tourist guide.

Email ThisBlogThis!Share to TwitterShare to FacebookShare to Pinterest
Labels: Parts of Scotland, travel