Yesterday I started very well with my Vegan Tuesday diet. I had a bowl of bran with soya milk. We always have soya milk in the house, as D only takes this in his tea for health reasons, so that part was not difficult. I don't particularly like the taste of soya milk as I find it quite powdery, but it's okay now and again.

Often I make my own lunch for work; or get a soup from the works canteen, but as I was on the move yesterday (literally), I had to make a shop purchase. I came across a vegan option called Bugsy: (no prizes for guessing why) a wholemeal sandwich made with grated organic carrots, hummus, rocket and alfalfa sprouts. I’ve had it before and not minded it, so this was my lunch, though it could have done with a bit of seasoning. I had a couple of cups of black coffee during the day, and it was around this I had slipped up. With one of my cups of black coffee I also bought a bar of chocolate (uh oh). As soon as I realised what I had done, I could have easily abandoned my attempts to fulfil Vegan Tuesday, but decided not too and still continue with what was left of the day. 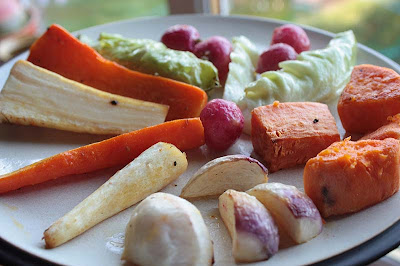 I had given D instructions of our evening supper, which was vegan, so I stuck with what was remaining of the day.

Okay I know I did not fulfil the Vegan Tuesday criteria wholly, but I tried. Let’s see if I can do much better in the future when I am not travelling about too much.

Our Vegan supper was this plate of roasted root vegetables: carrots, sweet potatoes, parsnips, radishes, turnips and a hispi cabbage, all baked in the oven with some seasoning and olive oil. No dressing, no sauce and certainly no chutney as it really was moist and flavoursome. The only thing that did not work too well was the parsnips, which were a little on the dry side.