Yesterday, D and myself spent about 5 hours at the allotment. D dug up the two blackcurrant bushes from Fitzy’s new plot and has reallocated them to ours in the border. I also pruned the gooseberry bush and did a bit of hoeing and harvesting. 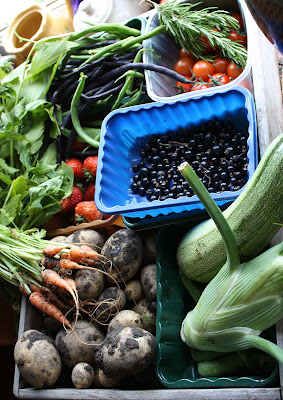 This is our harvest from yesterday: strawberries, tomatoes, radishes, courgettes, fennel, some baby carrots and herbs. There are no longer any green peas to pod, in its place we have climbing beans. I have harvested the last of our blackcurrants, enough to make some muffins I think. We dug up the second early potato bed in Plot 11, it was disappointing, for about 18 plants we yeilded just under 5lb.

As you know there was supposed to be a committee meeting, we got told that because the Treasurer and Secretary were not around that it was going to be cancelled. I shrieked well that is unacceptable, there has been thieving on the plots, and I know a number of people said they were going to attend, so who is going to listen to them, so one of the lay committee members persuaded the President to go ahead with it. What was disappointing was not one of the new or old plot holders who had something stolen recently attended. I was actually very annoyed. I understand that people have commitments and the day and time may not have suit them, but not one of them attended. One of them could have written a note or something about their disgust at the thieving, but no, instead they give others including my ear a chew of their annoyance. Well I refuse to listen anymore. If they cannot attend or write about things stolen from their plot, I refuse to 'spout up' on their behalf afterall these are adults who can stand up for themselves. 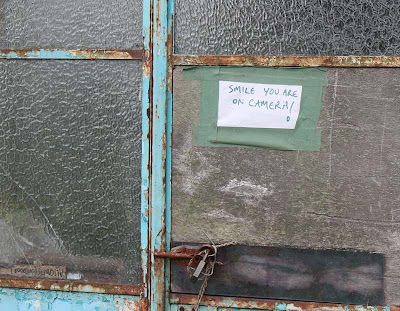 One thing that was agreed by those who attended, that it was definitely a plotholder, someone who has access to the allotment. So the thieving will just continue because we all allow it too.