I went along to a friends house early this week, (remember the courgette, apple and apricot cake). She’s been inviting me over since she moved into the area (over a year). Well this year, I was lured into her den with the promise of coming back home with a bag of fruit growing in her garden. She did not disappoint. Abundance of eating and cooking apples, I had missed out on her plums, coming home with a dozen or so. The other thing I found myself doing was picking her wild brambles aka blackberries.

So what to cook with first, the apples can wait. So it was either the plums or the brambles, okay it’s the plums as they are pretty ripe. So what’s it gonna be?! I've made a number of plum cakes last year; and although each one was delicious, I wanted something else. 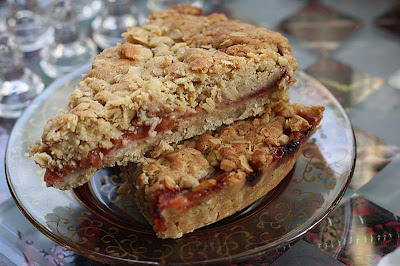 So after flicking through my cookbooks, I decided on making some flapjacks. Yes, plum flapjacks. A cross between biscuit and cake. These days flapjacks come in many flavours, but traditionally they are made with rolled oats, butter, sugar and golden syrup. One of my fellow bloggers notified me that in America flapjacks are known as a pancake. I found that extremely interesting.

As the plums and the apples were organic, I thought in order to support awareness for the Soil Association’s Organic Fortnight 3 – 17 September 2010, UK’s biggest celebration of all things organic, I thought I'd use organic oats, butter and sugar for this recipe. The flapjacks were sweet and sour and sharp just from the plums. I think, other than taking these into work to snack on, which was good. These flapjacks could easily be eaten with a spoon and some good organic vanilla ice-cream. 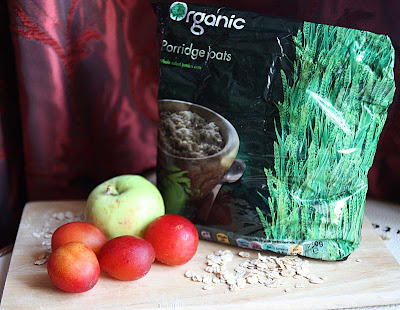 After reading some of your comments it occurred to me that I made some Strawberry and Raspberry oat bars last year. So if you want more oats in your slice, you may want to check out those recipes. You can even replace the strawberries and raspberries with autumnal blackberries and even plums.
Plum and Apple Flapjacks
You will also need a non-stick baking tin measuring 10 x 6 inches (25.5 x 15 cm) and 1 inch (2.5 cm) deep, lightly greased. I made mine in a round 9 inch tart dish, in which case it can be cut into 8-10 wedges.
Ingredients
350g fresh plums
1 medium apple
1 rounded teaspoon ground cinnamon
5 oz (150 g) organic porridge oats
10 oz (275 g) organic plain wholemeal flour
1 level teaspoon salt
8 oz (225 g) butter
4 oz (110 g) light brown soft sugar 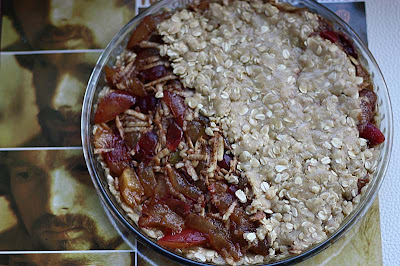 Method
Pre-heat the oven to gas mark 6.
Start by cutting all the plums in half, around and through their natural line, give a little twist to separate the halves and remove the stones, then cut them into thin slices. Now place them in a bowl. Grate the apple. Toss in with the plum and stir in the cinnamon. Next mix the flour and porridge oats together with the salt in a mixing bowl, then melt the butter and sugar in a small saucepan over a fairly gentle heat, stirring from time to time until the butter has melted. Now mix the melted butter and sugar with the oat mixture, starting with a wooden spoon but finishing off with your hands so you end up with a lump of dough. Now halve the dough and press one half of the mixture into the baking tin, pressing it firmly all over the base with your hands like a wall-to-wall carpet. Next scatter the plum-apple mixture evenly over the surface, then top with the remaining oat mixture, again pressing down firmly.
Now place the tin on the centre shelf of the oven and bake for 25-30 minutes, or a bit longer if you like the top really crispy. Then remove the tin from the oven and allow to cool for about 10 minutes before marking into 15 squares – to do this make 2 cuts length ways, then 4 cuts width ways, and don't worry if they're not all even. Unless you want to serve these warm, leave to cool completely in the tin. Original Delia Smith 'Plum and Apple Slices' recipe can be found here.