We took a drive along the West coast, our chosen destination was Saltcoats on the East coast of Scotland, but somewhere along the way we got distracted and saw a sign for Eglinton Country Park. 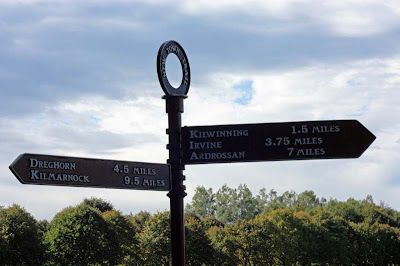 D was happy to play with the camera and me, I was happy to walk and explore. The amateur forager in me wanted see if there was any free wild food here to pick. Before we even got out of the car, we noted the number of people walking around with their dogs. In fact what surprised me was that there was a designated 'doggy loo' area. The park is listed as 'Friendly venue' for dogs by the Dog's Trust.

We looked at the noticeboard that informed us that between 2 - 4pm the countryside rangers were going to be opening the doors to the cottage and would be showcasing some hedgerow plants. I got a little bit excited and thought, maybe, just maybe they will have sloe berries here.
For those of you who have been reading my blog a while, will know that I've been on the hunt for sloe berries for a year. I was especially envious of Nic of Nip it in the Bud find last year. In fact my obsession was so bad, there were a number of nights when I found myself dreaming that I was picking sloe berries for a while. Why this sudden enthusiasm with sloes you may think? Well I blame my father-in-law for letting me taste some of his sloe gin two years ago and it was just so, so delicious. After learning that his friend had made it for him, I too just had to make my own. 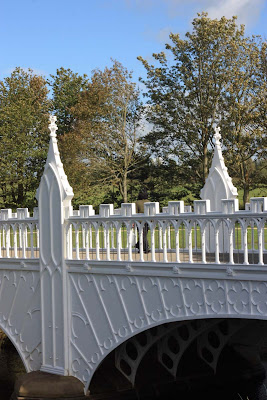 On our walk, we passed Eglington Tournament Bridge. 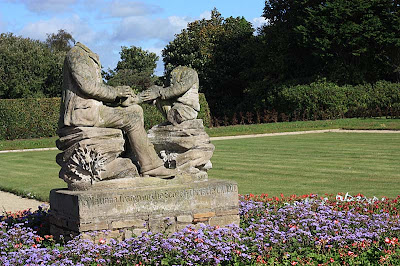 If you click on the image, you'll be able to read 'Ye Maunna Tramp on the Scotch Thistle, Laddie'. This sculpture was commissioned for the Kelvingrove International Exhibition of 1888. The statue sat on the roof of a soap factory in Paisley until being moved to Irvine in 1971 when the factory was demolished. The statue was eventually moved to Eglinton Country Park, where vandals stole the heads. Something similar happened to the life sized sailors known as 'Cavorting Sailors' in Leith, Edinburgh, except some of them were stolen. Below Eglinton Castle surviving walls. 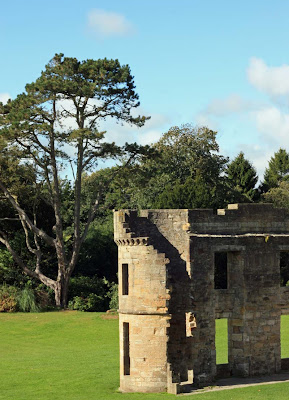 At one point, we passed a couple, perhaps in their mid 50s. At a glance I noted that they seemed to be foraging for chestnuts. I thought to myself I wonder if they know if there are any sloe berries around here. The eager bee in me approached them, first just saying 'hi', then asking directions as we were not familiar with the park and then, to the point 'do you know if there are any sloe berries around this park'. They were so lovely, and informed me that they came her often and unfortunately could not tell me of a spot where they were thriving, but there were plenty of elderberries. We thanked them and continued walking on. 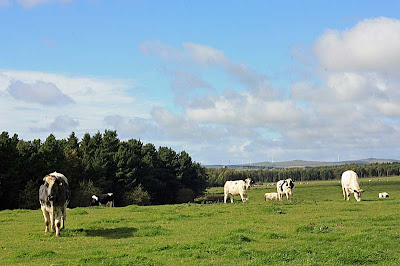 Eglinton cattle. Funny they started walking towards us. Whilst D was going camera snappy, I observed a man in his late forties walking through the park with his active Guide dog puppy. As he approached me, he nodded 'afternoon'; I responded back 'Afternoon, have you been busy foraging' and the conversation evolved. He was really friendly: in that short while, we spoke about his Mrs making bramble jelly, him foraging at the park for the past few years, the Guide dog puppy under training and sloe berries. He said, the same as the other couple 'plenty of elderberries' but sloes. Nah. As he walked away with the dog merrily bouncing in all directions, he turned and called me over. He said 'I'm not too sure if they were sloe berries or damsons, but I did see something a little while ago that resembled sloes'. I listened very carefully to his directions and Thanked him. At this stage, I'd be happy with damsons too as I've never had them either. In the back of my head, I could remembered fellow blogger Kath of the Ordinary Cook encouraging me to try damsons as well. 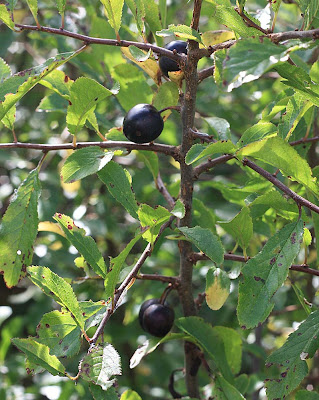 As we approached this little corner, I saw some isolated purple berries hanging. Could it be, no, really - sloe berries. Not that there were that many there as the branches were pretty much stripped, but D still wouldn't let me collect many. I asserted, this is where that man said they were. Sadly he was not confident in me identifying these as sloe berries. So I said to him, 'these must be sloe berries, there are hardly any here, someones already picked the ones within reach. Listen, let me pick some, the countryside-rangers got that hedgerow plant identifying event on, I'll get confirmation from them'. We agreed. 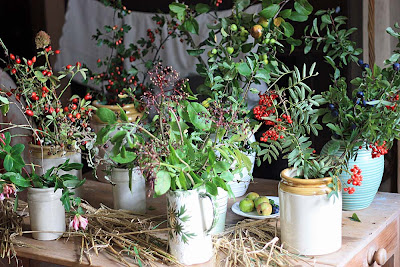 Yes, hooray - it was confirmed that these berries were indeed sloe berries. The countryside ranger working in the cottage house had a vase full on display. Here you will also see Hawthorn, wild rose-hip, wild crab apples, Elderberries and Rowan Ash. 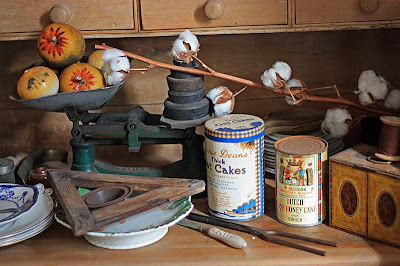 Whilst inside, we couldn't help have a closer look at the other kitchenalia. 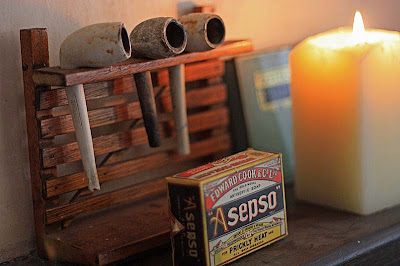 Pretty happy with myself, it was time to head back home. 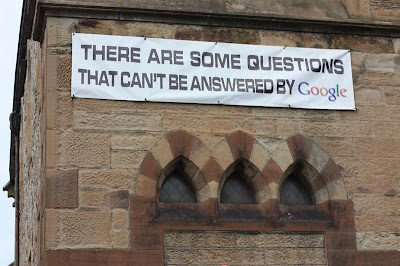 Oh one more thing, some of you may have seen these banners outside Christian places of worship. I just feel I have to share this. It warmed my little heart.