Even though he has not said it out loud, I can see it in D’s body language ‘ Oh, not runner beans again!’. But what can I do, they are still growing in the garden plot. Some are a little far gone, the skins tough to chew due to neglect, however others can still be picked and eaten. I have to admit the thought of eating plain runner beans coated in a little butter or olive oil did not thrill me either, so I have had to find another way of eating them. We’ve already eaten them in salads and 'spiced up' in various ways. This time it was Ceylonese spiced runner beans. I have to admit, I know very little about Ceylonese (now Sri Lanka) cuisine. My assumption like many is that it is similar to South Asian, namely Indian food, but as I delved more. I learned that there are also Arab, British, Dutch and Portuguese influences. Alongside these influences, the country has some of its own traditional Sri Lankan offerings such as the renowned 'hoppers' (crispy at the edge and gooey in the middle pancakes) that every tourist reminisces about when back on home turf. There is also kiri bath (milk rice served at ceremonies), pol sambol (fresh grated coconut combined with chilli, onions, lime salt and pepper) and kavum (dough cakes deep-fried in coconut oil). 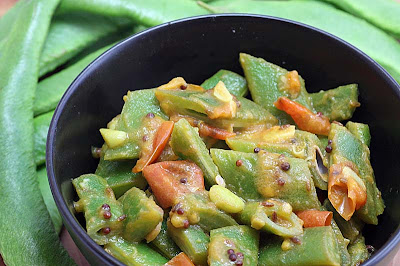 Ceylonese spiced runner beans
Serves 4
Ingredients
300g runner beans,
2 tablespoons sunflower oil
2 garlic cloves, finely chopped
½ teaspoon cumin seeds
½ teaspoon black or brown mustard seeds
¼ teaspoon ground turmeric
½ teaspoon ground coriander
2 medium tomatoes, roughly chopped
1 teaspoon, grated root ginger
½ teaspoon salt
Juice of ½ lemon or more to taste
Method
If the runner beans are a little tough, string them, then top and tail. Slice diagonally into 1 ½ inch pieces. Cook the runner beans in a pan of boiling salted water until just tender, then drain and set aside.
Heat the oil in a large pan and cook the garlic for a minute. Add the cumin and mustard seeds and cook for another minute, then add the ground spices and cook for a further minute. Stir in the chopped tomatoes and simmer for a couple of minutes until softened and a little pulpy. Stir in the beans, ginger, salt and lemon and simmer for five minutes. Adapted from Ainsley Harriott’s Gourmet Express 2.