I was given this recipe by my neighbour, who sadly passed away whilst we were in France.

A few weeks before going to France, we had a conversation over the garden fence about knitting. I expressed that I was interested in learning to knit but just didn't have the time. My experience of knitting only extended to a tea cosy. In fact I remember saying to her, that my best friend in America had a little girl and I so, so wished I could send her something that I had handmade, like hand knitted baby boots. She smiled and proudly pointed to the orange cardigan she was wearing and said ‘I knitted this. I knit all my cardigans'. I looked at the detail in her cardigan, so intricate and skilled. She laughed ‘oh this pattern is so easy’. During the conversation she offered to teach me, which I so happily accepted, (even better that there was no need to travel as she was only next door). She gave me some wool, knitting needles to practice the basic stitch and a pattern, so that I could get used to ‘knit speak’. This weekend just gone, would have been my first official lesson with her.

She will be sadly missed by D and me for a number of reasons. We will remember her fondly, as she shared our love for gardening and growing vegetables in her tiny space. This excited us when we first moved in and our friendship developed from there. One of the first things she told us was about the cooking apple tree in our garden. Often half of the apples from the tree would land in her garden. So come late Autumn, she would pick the windfall: wash, core, chop and freeze apple slices to make crumble or apple pie in the winter. I don’t know if she ever made this apple butter herself; or just gave it to me because she knew I liked to cook, but I make it for the first time in her honour. 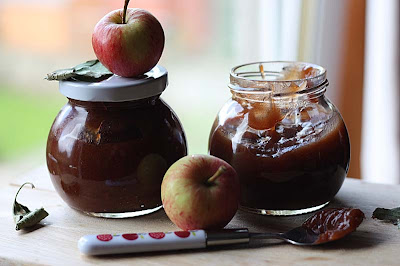 I made the 'apple butter' with the various apples I had been given by my friend last week. This made me giggle a little and then shake my head at my greediness. As yesterday, the crashing and blustery wind had knocked down a good basket full of cooking apples from my own tree. So more appley recipes to come.

I also have to apologise to you all for the state of my pouring the apple butter into jars. I seem to have misplaced my jam jar funnel, so it was rather difficult pouring the apple butter into the jam jars in an elegant manner. It was fun licking my fingers afterwards though. D tasted a little and said 'MMmmmm.....tastes like baby food'. I don't know if that is a good thing?! 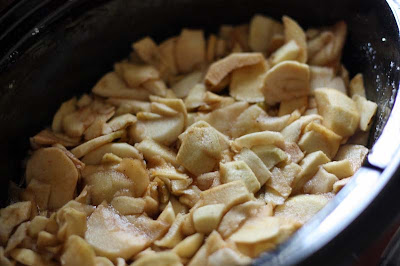 *The original recipe used mixed spice, but the closest I had in my kitchen cupboard was a jar of allspice, so that is what I substituted it with. Although the peeling and chopping of the apples was the most consuming part of the process, I really loved the ease in making this recipe... 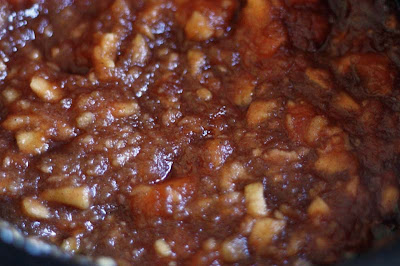 No need to stand over and watch, just the occasional stirring and then it was ready. My one advice on making this apple butter is to start early in the morning. You don’t want to start this late in the afternoon and its ready for jarring way after midnight. 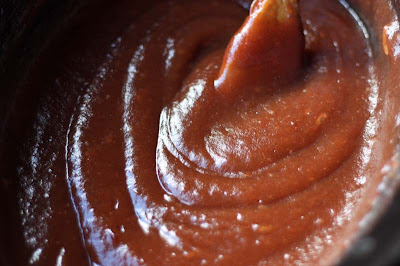 Slow cooker Spiced Apple Butter
Makes 5 x 300g jars
Ingredients
2lb, peel and chop the apples roughly (mixed variety)
310g granulated sugar
165g light brown sugar
2 teaspoons cinnamon
1 teaspoon allspice*
½ teaspoon salt
Method
Place all ingredients in slow cooker and stir so all apples are coated well with the sugar and spices. Cook on HIGH for 1 hour. Reduce to LOW for 8 to 9 hours, stirring occasionally. During this stage, the apples will soften and break down (looking not particularly appetizing, but they do eventually turn a deep rich toffee brown color. Turn off slow cooker.
Either use a hand-held blender (much easier I think), mash by hand (be warned that the final result may not be totally smooth) or pulse in a blender (this is a little bit of a hassle, but worth it), so that the apples are a smooth creamy buttery consistency. Then fill jars.
Up-dated 31/10/2010: A fellow blogger made a version of my Spiced Apple Butter. See here.