Well I've eaten my fair share of sweet things recently, so didn't want to make another cake. So the question was what else could I do with the blackberries I had picked at my friends place, that were beginning to soften in the fridge. As always I flicked though my cookbooks, saw many recipes for cakes galore and other sweet things such as ice-cream and sorbets. As my teeth are a little sensitive at the moment, plus I've lost a filling - iced things were not an option either. 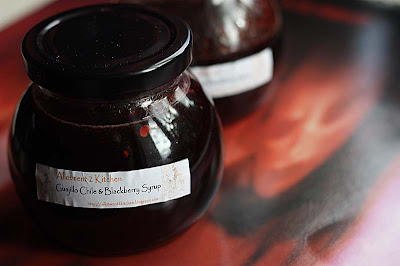 Then I went on the world wide web and did a search for a blackberry recipe, other than cake. I came across many, but the one that caught my attention was Heidi Swanson's recipe for Chile Blackberry Syrup. I remembered littleblackfox had sent me a couple of big guajillo chiles in the post a couple of months ago. In fact I have been rather spoiled this year, fellow blogger Ginny of Modern Homestead sent me this fabulous industrial mosaic hand crafted dragonfly (see side bar) for my garden. As it rains so bad in the West of Scotland; and is just too pretty it is hanging in my hallway rather than in the garden. I want to say a special heartfelt Thank you to them both for the kindness, affection and generosity they have both shown towards me. Please do take time to visit there blogs, you will also see that they have a keen sense of humour.

So with the two guajillo chiles described by littleblackfox as 'sweet, medium heat with a cherry flavour. Lovely with rice and in sauce'. I decided on making this syrup. It was a rather messy affair in the kitchen with lots of kitchen equipment being used, but also a little wiping down and mopping up was necessary. But the final resulting syrup was rather warming. The syrup certainly had a good spice kick.

Just in case you are wondering what on earth would I do with a spicy syrup, well it is actually very versatile. You can swirl it into yogurt, porridge, drizzled over waffles, pancakes and crepes and even drizzled over goat cheese salad. In fact the taste of this spiced sweet syrup reminded me of Moosewood's raspberry chipotle sauce that was served with scrambled tofu, so I can imagine it drizzled over savoury dishes too. 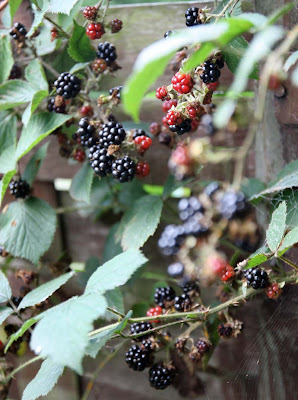 Guajillo Chile Blackberry Syrup
Makes 2 x 300g jars
Ingredients
2 dried guajillo peppers
170g dark Muscovado sugar or dark brown sugar
200 g organic sugar
355 ml water
Juice from 1 lemon
100g blackberries
Method
Trim the stems from the dried chiles. Tear or snip the chiles with scissors or a knife into pieces and drop with seeds into a medium saucepan. Stir in the sugars, water, and lemon juice, and bring the mixture to a boil over medium heat. Boil, stirring regularly, until the mixture has reduced to 475 ml, roughly 20 - 30 minutes.
In the meantime, puree the blackberries either with a hand blender in a small bowl or a blender. Force the berries through a fine-mesh strainer, and discard the seeds. Set the berry puree aside. Once the chile mixture has reduced, remove from heat, and puree it until smooth. Strain through a sieve into a heat-proof bowl. Press on the remaining solids in the strainer to squeeze out any syrup, and discard the remaining solids.
Whisk the berries into the chile syrup and set aside to cool. Place in a jar, or smaller jars, and refrigerate. The syrup keeps covered, and chilled for a few weeks. Adapted very slightly from Heidi Swanson's superb website 101 cookbooks, who in turn adapted the recipe from the September 2007 edition of Gourmet Magazine. Isn't it wonderful how recipes change from one cook to another?!