There was once a time when I actually thought Jerusalem Artichokes came from a little place called Jerusalem, and that they were indeed an artichoke. It was only upon growing my own that I learned it was neither from Jerusalem or an artichoke, but actually a type of sunflower. 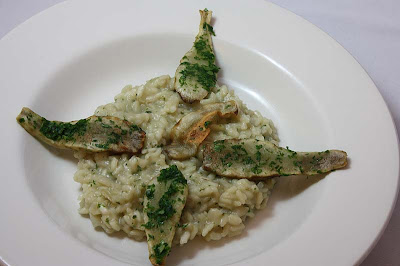 Like many seasonal home-cooks, I’ve been looking for inspiration on what to do with Jerusalem artichokes which of course are in season. This shouldn’t be that difficult to do, especially as it’s a versatile vegetable. Did you know that you can actually eat them whole knobbly root vegetable including its skin. They can also be eaten raw, added to salads with a little dressing. Or, they can be baked, steamed, stir fried or roasted. However, be careful not to overcook them, as they will turn to mush. You can mash them too but I would recommend half potatoes and half Jerusalem artichokes, otherwise the texture will be somewhat watery. In the past I’ve made Jerusalem artichoke and walnut parcel, crisps, gratin, stoved artichokes and even soup, so was looking for something different to do with them. I flicked through some of my cookbooks and came across variations of Jerusalem artichoke soup recipes, but soup is not what I wanted to make. Then I came across a risotto recipe in one of Denis Cotters cookbooks, without much thought I decided to go with. It was only when I started reading the cooking method that I realised this was not going to be a straightforward risotto recipe, where simple vegetable stock is ladled into the fattening. Making this particular risotto recipe involved a couple of processes. For example, here you have to about cook half the Jerusalem artichokes with some onion and garlic before adding vegetable stock. Then blitzed and sieved to create an intensely flavoured broth which is then used in place of the stock to make the risotto. Mmmm I don’t think I was going to follow the instructions word for word, especially the sieving part. I wasn’t going to be doing that just for D and me, maybe Greg Wallace and John Torode the judges of Masterchef U.K, but not for us, so I had decided that I was going to skip on some of these processes. The other half or the artichokes are roasted and added towards the end of the dish so that they look like oyster mushrooms. 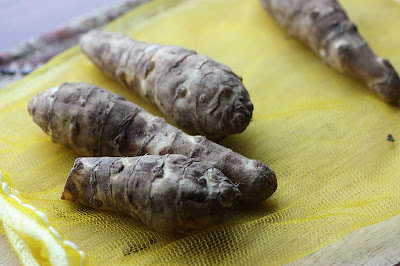 Although cooking risotto in this manner added a little extra cooking time, it was actually worth the wait. The risotto was soft, creamy, deep and nutty in flavour. I also enjoyed this way of making the broth and thank Mr Cotter for introducing me to this method. I can see it working in other root vegetable risottos such as the carrot and parsley risotto that I’ve made in the past and perhaps even a parsnip risotto. MMm I think there is a little chef in me. 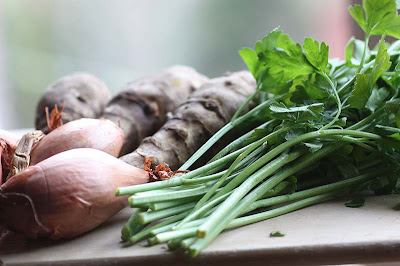 I am submitting this recipe into Weekend Herb Blogging#224. WHB is a weekly food blog event that showcases information and recipes about herbs, vegetables, fruits and other plant ingredients. WHB was initiated four years ago by Kalyn's Kitchen, it is now organized by Haalo of Cook (Almost) Anything At Least Once. This weeks host is Huan from Eat.Read.Live. 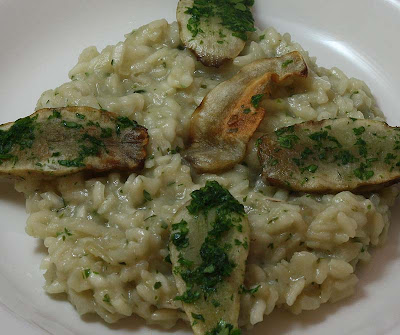 Jerusalem Artichoke and parsley risottoServes 2 - 3
Ingredients
6 Shallots, finely sliced
4 cloves of garlic, minced
Olive oil
1 ½ pints of vegetable stock
220g Arborio or Carnaroli rice
450g Jerusalem artichokes, peeled and sliced
4 – 6 tablespoons minced fresh Parsley
Salt and pepper to taste
Method
For the Jerusalem artichoke broth
In a large saucepan add a little olive oil and add 4 of the shallots and 2 garlic and cook until soft and tender, then add about 300g of thereabouts of the Jerusalem artichokes and cover and cook for about 5 minutes, then add vegetable stock, bring to a boil, then lower the heat and simmer for 20 minutes or so, or until the artichokes are soft. Remove the pan from the heat and blend the mixture to a puree. Return to a pot and keep warm on low heat.
For the roasted artichokes
Coat the remaining artichokes in olive oil and bake them in the oven at Gas mark 4 turning over at least once, until tender. When cooked. Turn oven down to keep warm until the risotto is ready.
For the risotto
Heat two tablespoons of olive oil in a wide pan and gently fry the remaining shallots and garlic for five minutes, than add the rice and toast of medium heat for a few minutes, stirring often until rice is well coated in oil. Now slowly begin to ladle in one or two of the warm Jerusalem artichoke broth. Let this simmer until it is all absorbed, stirring often, then add more broth. Continue this way, until the rice is tender. This should take about 20 – 25 minutes, before adding the last two ladles add the roasted Jerusalem artichokes, parsley and seasoning. Serve immediately on warm plates. Optional: To finish drizzle over some good olive oil or a scattering of vegetarian Parmesan or pecorino. Adapted from the wonderful Denis Cotters Wild Garlic, Gooseberries and me