I don't have any roots in Ireland, but I do very much enjoy the sense of occasion that comes with St Patrick's day. This year fellow bloggers across blogosphere will be joining in the celebrations too and creating culinary delights, as well as those you can drink and get rather tipsy on. I thought to myself why not join in and do a little bit of Irish cooking too, but other than the numerous delicious potato recipes which incidentally are accompaniments, you have to admit that 'traditional Irish vegetarian food' is pretty much an oxymoron. (I am happy to be told that I am wrong). So I decided to do a bit of home-baking instead. 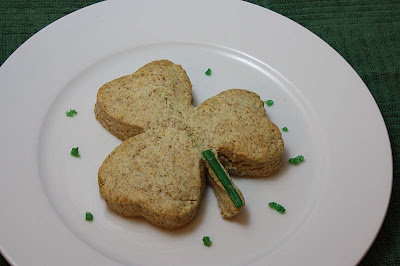 May I present to you my Shamrock Brown Scones. For those of you who may not know, may I share with you that St Patrick used the shamrock as a symbol to explain the concept of the holy Trinity in Christianity. 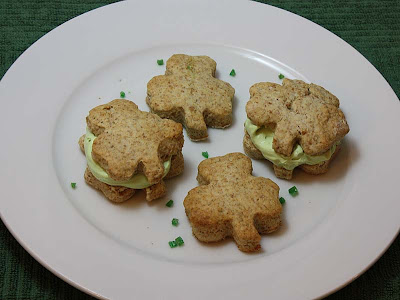 Believe it or not, these Irish Brown scones actually come from an Irish Vegetarian cookbook. As someone who enjoys eating her spuds and vegetables, last year like a mad woman I hunted for a Irish Vegetarian cookbook and could not find one, by heck I could. Eventually I tracked on down in Edinburgh at an independent bookshop called Word Power. Whilst in Edinburgh, I also picked up some pretty shamrock baking cups, unfortunately it looks like I won't be using them this year. 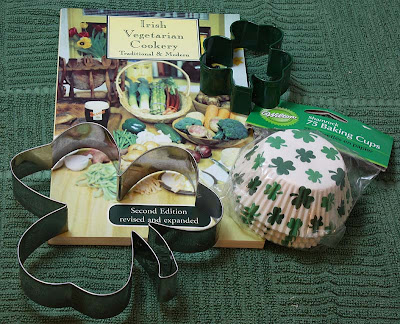 I am submitting these scones to The Daily Spud who is hosting a Paddy's Day Food Parade on the 17th March. A great way to join in the revelries without leaving home, especially as I'm doing the early shift the following day. 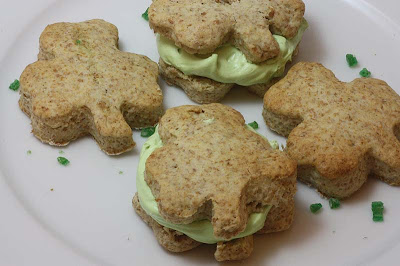 Instead of plain whipped cream, I thought I would apply a little natural green colouring to the whipped cream, and sprinkled it with a some little green gems (chopped Angelica). To make it more patriotic, you see. D said all that was missing was a green jam or preserve, something like gooseberries. mmmm Maybe next time. 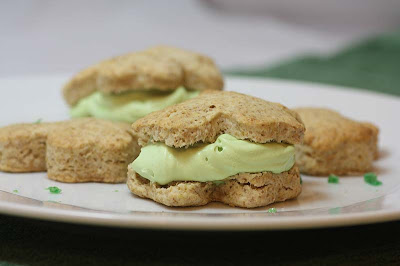 Most people know how to make a good scone recipe, so I won't publish the recipe here. But for your information this one uses half plain flour and half wholemeal flour, full fat butter and full fat milk. Well its got to have full flavour. Recipe made from Irish Vegetarian Cookery: Traditional and Modern by Patrick Cotter (and no he is not related to Denis Cotter of Cafe Paradiso).