Cabbage recipe with a difference

I often struggle to know what to do with cabbage and this recipe is nothing special either, its sliced so it looks like noodles, lightly steamed, then doused in good olive oil with a generous sprinkling of Middle eastern spices which include sumac, oregano and sea salt. Quite simple, I know - but different. 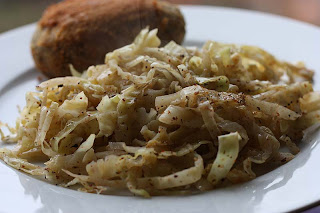 I served this Sumac cabbage with the vegetarian kievs. 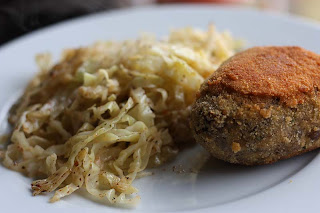 But before enjoying this meal, we had quite a busy day playing tourists. We decided to take a drive out to Stirlingshire. The main reason for this journey was to check out this Farm shop and see if this could support our quest in sourcing local and seasonal vegetables. On the itinerary, we also decided to take a drive to Stirling Castle. I've been to Stirling a number of times for work, but have never ventured as far as the castle. So this appealed to us. When we got to Stirling, we parked the car in a shopping centre and then walked up to the castle. My goodness I am so unfit, I was huffing and puffing. I blame all those muffins...but will I give them up? nah. I like them too much and I've never been one to diet, its exercise I need. So this walking, even if it is up hill is good for me, and all that fresh air. 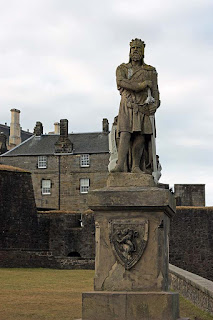 Anyway, this is an impressive statue depicting William Wallace just outside the entrance of the castle. There was also one at the bottom of the National Wallace Monument site just a stones throw away from the castle, but anyone who has been there and seen it will tell you it looks more like the actor Mel Gibson who played William Wallace in the movie Braveheart. I too will vouch for this seeing it will my own very eyes. Just to let you know that particular statue is no longer there. After walking all the way up to the castle we decided we didn't want to pay £9.00 x 2 for the privilege of going in. Instead we had a good nosy round of what we could for free. 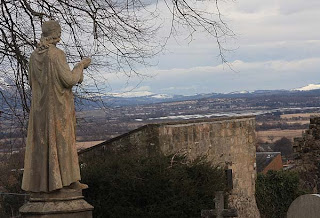 We walked through this cemetery which is next to the castle. 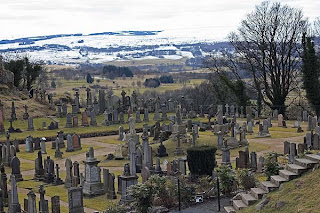 It is very impressive. Elaborate headstones. Look at the snow capped mountains in the distance. It really was something to appreciate. Then gently winded our way back down to the town centre. 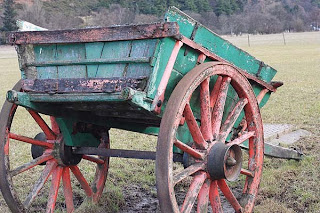 On our drive back home, we stopped at this farm shop. I remembered being very impressed with it the last time we stopped by. But this time with a discerning eye, I noted it was not all that it appeared. Of course, the crafts objects were Scottish, from the soap, handmade cards to the dried flowers, and Yes the cakes, oat biscuits and bread were home-baked. The meat was locally farmed and the eggs were local, but the fresh produce, such as fruit, vegetables and salads had all pretty much come from elsewhere. This is fine and I accept this, after all it is the winter season and there is not that much to growing and little in storage, but none of the vegetables and fruit were labelled accordingly which I thought was a shame. The frozen fruit such as berries or home-made ready meals had come Kent, these for some reason were labelled. I asked about the rhubarb and was informed that they had got it from Glasgow's Traders Fruit Market, but even that had not been grown in Scotland. I have to say I was a little disappointed as I had hoped this was going to be one way we could try our best to source local and seasonal veg, but unfortunately that is not going to be the case. The assumption many people make about farm shops is that bulk of the fruit and vegetables sold at such places is seasonal, local or at least regional and sometimes organic. This is not always the case. Nevertheless, I applaud and will continue on some level to support such initiatives when I can. 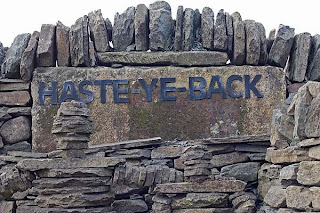