Pancakes are not just for Shrove Tuesday, but for breakfast - any time of the year too. However, these are not the flat thin pancakes that cover the whole of a frying pan, but small drop scone-like. What we know in the U.K as American style pancakes.

I decided to make some with apples, but I think they would work well with other fruit like bananas and pears. 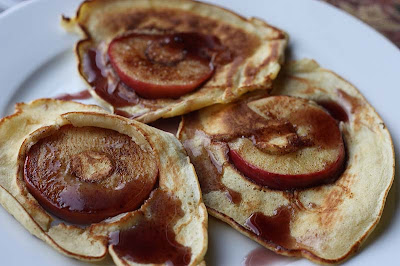 Although these were light and delightful to eat, I think they would have gone up a notch if they had been served with some sharp blackberries or even blueberries, but as they are not in season I substituted this gap with some blueberry syrup. A little expensive I admit, but it was a treat and one well worth it after being poorly all week. D appreciated them, all I could hear was 'nom nom nom'. 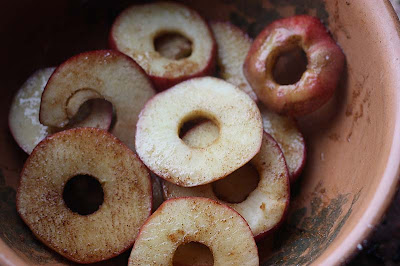 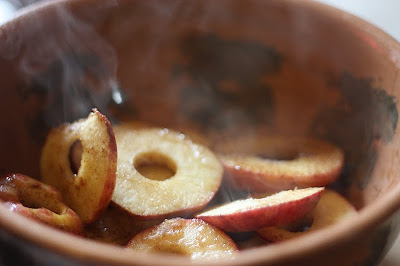 Method
For the cinnamon apples: In a bowl, add the sliced apples, cinnamon, maple syrup and mix to coat. Melt the butter in a frying pan over medium heat. Add half the sliced apples and cook for about a minute until its starts to soften. Remove from the pan and cook the remaining apple slices. Set aside. Wash and dry the frying pan.
For the pancakes: Sift the flour and the baking powder, then stir in the sugar. In another bowl, mix together the milk, puree, oil and 1 egg; gently fold mixture into dry ingredients until well combined. Add a little oil to a frying pan and gently heat; add four slices of apples in the pan a little apart, then drop in about 2 – 3 tablespoons of the batter over the apple slices. Cook pancakes about 3 minutes on each side. Continue doing this until all the apples are gone. Serve warm with honey or maple syrup. Idea inspired by Ainsley Harriot's Feel Good. If you have any left over, put them in the fridge as they do keep well and can be eaten cold.