Be patient, you’ll see why in a moment 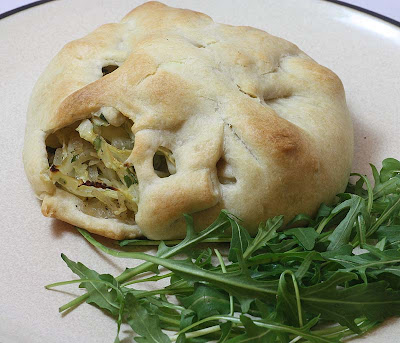 In an attempt to use up the remaining cabbage in the fridge, this recipe began as a version of the Russian kulibiaka (pronounced koo-leeb-yah-ka). Kulibiaka is a pastry pie traditionally made with cabbage, however this quickly morphed into the French adaptation of the coulibiac (pronounced koo-leeb-yahk) which includes rice, mushrooms, hard boiled eggs and salmon, but of course I wanted to make a relatively quick vegetarian alternative. So this is what we ended up with. I know, absolutely nothing like the real thing, but we enjoyed them. The subtle flavour of the cabbage came through with the parsley, and the surprise: simply a hard boiled egg. 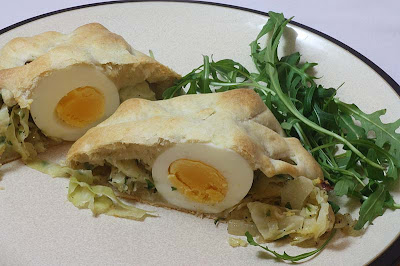 These cabbage pastry pies were quite large, so I actually though that you don’t need very much else with it, but D my husband, demi-vegetarian by association had other ideas. Today he insisted that he wanted his served with some salmon. He had decided that he wanted his cabbage pie to be as close to a coulibiac as it could be. I let him be. I think it is good of him to be eating what I cook for him and without fuss I hasten to add, so I wasn’t going to make an issue of the accompaniment on his plate. 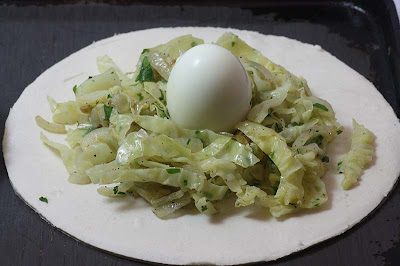 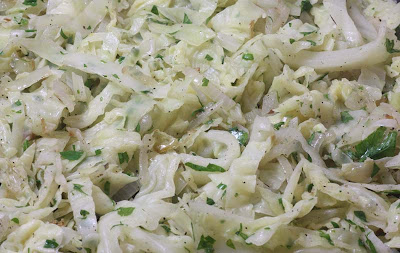 Method
Heat oven to gas mark 6.Cook cabbage in boiling water until tender, drain and set aside. Heat the oil and cook the onion until soft, add the cabbage, stir well and cook for 6 minutes. Remove from the heat and add the parsley. Season well. Either cut out 2 round circles with the puff pastry, you may need to re-roll the pastry or use the ready rolled pastry as it is and spread the cooked cabbage, leaving about ½ inch for sealing. Then put in the egg, either half or whole, and then gently pull the pastry ends to pinch together to seal (look at image below), gently transfer onto a lightly greased baking sheet. 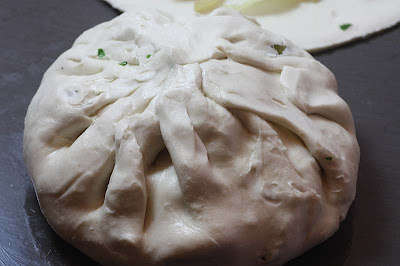 Bake in oven for 20 - 30 minutes until well risen and golden brown. Serve immediately. Please note these pies can be made either into individuals portions, or in a long loaf style.