Shepherdess Pie without the Shepherds and the sheep

The British comfort food 'Shepherds pie' seems to be making a comeback as its been appearing on a lot of blogs recently. I wonder if Gwyneth Paltrow has got anything to do with it?! Anyway, I thought I'd make some this weekend too. However, mine of course is made without minced meat, it not even made with faux meat, but with some seasonal winter vegetables and aduki beans fondly called "red dragon" or "red wonder" beans. Another thing, this Shepherds pie is actually called Shepherdess pie simply because its meat free. And as its officially spring, I am going to say this Shepherdess has little lambs jumping around her with joy. I'm such a romantic sometimes. 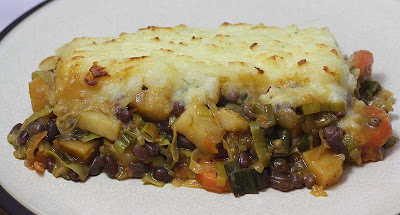 The last time I made this Shepherdess pie was in 2005. How can I remember you may wonder? Well whenever I cook a recipe from a cookbook, I often scribble on it the date and how I found the dish. My scribbles reveal the date 4th January 2005 and my comment next to the recipe was it was very strong in flavour. I think this was because of the yeast extract which I reduced this time. The pie was really good. All the vegetables were cooked well and the flavours of each came though. I was particularly nervous about the swede, but even that was tender. Some of you may know that I am not a big fan of mash either, but this one was actually very good too. I think the reason was the crispness on the top. 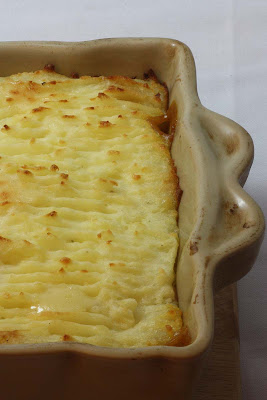 This recipe makes a large quantity. Enough to serve 6, maybe even 8 people with accompaniments. So its a dish that is going to feed us at least three times this coming week. This dish had a number of different processes to bring it together, so my recommendation make this pie when you have time on your hands to potter in the kitchen, which is what I did this afternoon when it started raining outside. 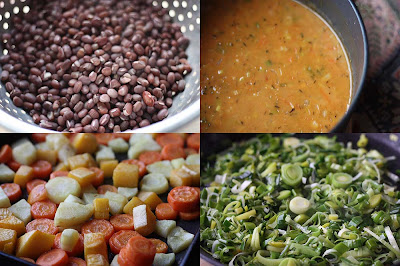 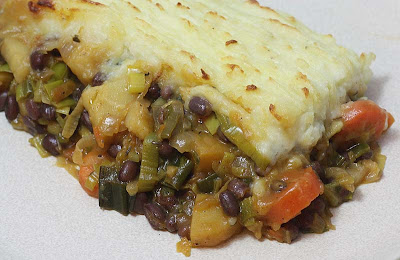 Method
For the vegetables: Preheat oven to gas mark 5. Place the swede cubes on a baking tray with oil and salt and cook for 20 minutes, then add the carrots and parsnips and cook for a further 15 minutes, until all the vegetables are tender. Set aside.
Stir fry the leeks in a little olive oil until soft. Set aside.
For the sauce: In a saucepan place the butter, onion, leeks carrots paprika and rosemary. Cook until completely soft. Reduce the temperature and stir in the flour. Cook for a few minutes until the texture of roux changes to that of breadcrumbs. Gradually add the vegetable stock and mustard, yeast extract, tamari and tomato puree. Bring to a boil and season. Set aside.
Combine the cooked aduki beans and all the vegetables with the sauce. Turn out into a deep ovenproof dish.
Prepare the topping: by mashing the potatoes with salt and pepper until smooth and free of lumps (I actually get D to do this as I am a very bad potato masher. I like texture and lumps in my mash). Optional: stir in Cheddar cheese. Top the vegetables with the mashed potatoes and fork over gently if you want it to have that forked effect. Bake in the oven for 35 - 40 minuted until golden brown. Adapted from the brilliant New Food for Thought.