Those of you who are familiar with Oraphan’s blog Easy Veggie will know that I won one of the books for her 50th post contest. Readers were also asked to submit an Easy Veggie dish. I had not realised I had won and Oraphan made a decision not contact me. She later informed me that she really wanted to leave a comment on my blog and let me know that I had won one of the cookbooks, but at the same time, she also wanted me to discover for myself, so that it was a surprise. And it really was, it just so happened when I was catching up with my weekly reads, I learned that I was one of the winners. Wow, I had won Vegetarian Suppers, the other book was Vegetable Soups. I was genuinely surprised to have won this book for two reason, one it was by a vegetarian chef I admire, and two, it was a cookbook that I did not have, which is amazing in itself. I already have Deborah Madisons: The Greens Cookbook, The Savoury Way and even Vegetable Soups – imagine if Random.org chose me for that book, fortunately it didn’t and it went to the right person. Thank you so much Oraphan for the book and the lovely magnetic bookmark you sent with it. Most appreciated. 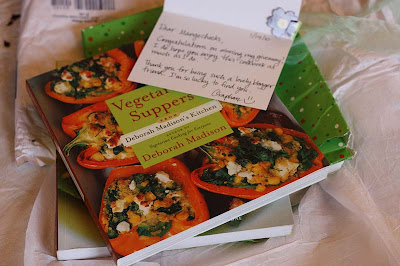 I first discovered Deborah Madisons books when I was invited to the States in 2000 by my closest friend. She had this big orange sleeved cookbook on one of her shelves along with a number of Moosewood Restaurant cookbooks, but it was Vegetarian Cooking for Everyone that grabbed my attention at the time. I left America with some souvenirs, a couple of thumb rings which I am still wearing to this day (see header) and my own heavy copy of Vegetarian Cooking for Everyone. My dear friend said to me ‘you better cook from that’.

Anyway, I digress - I received Vegetarian Suppers early last week and have been wanting to cook from it, but the question is what, there are so many enticing recipes to choose from. So please do come by later in the week to check out what I decided to make.