Okay, okay I put my hands up, I know I have been a tad naughty as I have eaten two vegetables that are out of season: peppers a week or so ago and aubergine today. However, I think your should be lenient with me and give me some credit as I have been pretty good most of the year.
It is generally over the winter season when fresh vegetables of my own are low. I tend to rely heavily only store-cupboard ingredients, some of my home-made pickles, preserves and chutneys, as well as my freezer and cold stored vegetables such as onions, potatoes and garlic, but even they are not going to see me through the 'hungry gap'. So I rely on othere sources, such as grocery stores, supermarkets (and in some cases, like now some of the veg will be out of season). Also in my defence, as someone who lives in a small flat near the city, I am not self-sufficient. I don’t have acres of land, a small farm with chickens; or poly-tunnels to grow my own salad all year round. I aspire to that green, self-sustainable lifestyle, but in truth like many I cannot afford that place in the countryside, therefore do what is realistic and feasible for me now. So yes, I will lapse and be tempted by out of season ingredients not grown in the U.K, namely peppers and aubergines. I know this is not a good enough excuse, but these are two vegetables that I can’t seem to grow well even during the growing season, aaahhhh I know, I know, what a poor excuse. But heck I enjoyed what I ate. 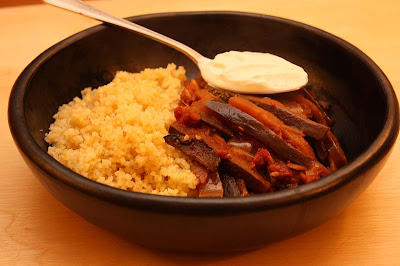 I have to admit I was a little sceptic of this dish as the aubergine is not one of my favourite vegetables, or is it a fruit – anyway, I was splendidly surprised at how much I enjoyed the flavours. This is a hearty stew enhanced with the deep robust flavour of paprika. This stew is accompanied with a bowl of nutty, chewy bulghur wheat.

This is not the most photogenic of dishes either and to be honest looking at the texture brings back memories of when I really disliked both aubergines and mushrooms, thankfully those days are gone and I no longer hold a grudge towards these two particular ingredients. 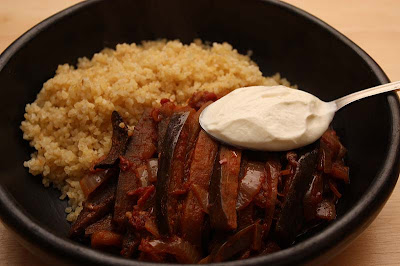 Hungarian Aubergine Stew served with Bulghur wheatServes 2 – 3 (it could stretch up to 4)
Ingredients
For the bulgur wheat
200g Bulghur wheat
¼ teaspoon salt
2 teaspoons olive oil
1½ cup or 300ml boiling water
For the Hungarian aubergine Stew
2 medium onions, finely sliced
2 - 3 cloves of garlic, crushed
2 medium aubergines
100g mushrooms or thereabouts (I used Portobello)
1 tablespoon paprika
1 teaspoon of smoked Hungarian paprika
1 teaspoon dried oregano
½ teaspoon red chilli flakes
4 tablespoon olive oil
½ teaspoon salt
1 x 400g can of chopped tomatoes
Plain yogurt or vegan alternative (for serving)
Method
In a saucepan with a tight-fitting lid, cook the bulghur and salt in the oil over medium heat, stirring constantly, for a couple of minutes to lightly toast the bulghur. Add the boiling water, reduce the heat to low and cook covered for about 12 – 15 minutes or until all the water has been absorbed. When the bulghur is done, turn off the heat and let it sit covered until ready to serve.
While the bulghur cooks, prepare the vegetables. Cut the onion into thin slices. Crush the garlic. Cut the aubergine in half length ways, then into sticks about 2 inches long and ½ inch thick. Slice the mushrooms.
In a large pot, over medium heat cook the onion, garlic, paprika, oregano and red pepper flakes in the oil. Stirring often until the onions begin to soften. Add the eggplant, sprinkle with the salt and cook, stirring constantly for a couple of minutes. Add the mushrooms, increase the heat and continue to cook, stirring frequently for a couple of minutes. Add the tomatoes, cover and cook on low heart for about 10 minutes, until the vegetables are tender. The dish should be thick and saucy. Serve on the bulghur, topped with yogurt. Adapted from Moosewood Restaurant Simple Suppers