This is another adapted recipe from Deborah Madisons Vegetarian Suppers. Deborah states that the recipe was originally a nutloaf recipe, but she tampered with it to create burgers. I did of course make some burgers this morning for breakfast, but last night I also took the decision to use some of the filling for these savoury swirls. 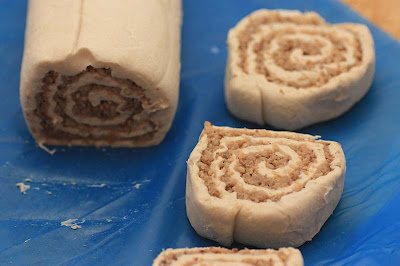 I used to make these savoury swirls with Nadine Abensurs delicious Mushroom Wellington. Anyone who has Nadine Abensurs book with this recipe, will know that this recipe is a generous one, making two - not one nutroast. In the past I have made two nut roasts, and one actually went to waste as I never got round to defrosting and cooking with it. Then I came across a nifty little idea to make it last, make individual portions in the form of these Savoury Swirls. 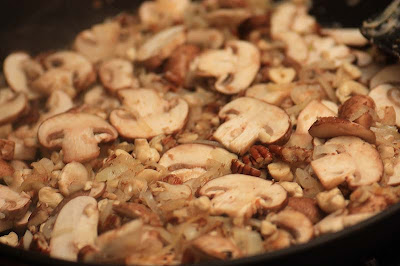 I rolled out the dough, then generously pasted it with the filling, and then gently rolled it so that is looked like one of those sweet roly poly desserts. I cut them into individuals pieces and froze them with parchment paper between so that they didn’t stick. There you have a quick meal. Out of the freezer into the oven at Gas mark 6 for 20 – 30 minutes until golden and puffed. They really worked well. 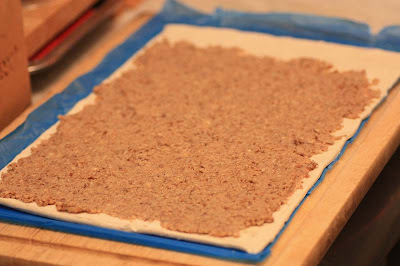 So this is what I decided to do with this recipe, except of course I cheated a bit and used ready rolled puff pastry. These savoury swirls are part of our meal this evening. Hope the nephews like it. I know I will.
Brown Rice-Mushroom Savoury Swirls
Makes 12
Ingredients
1 tablespoon olive oil or sunflower oil
1 large onion, minced
1 teaspoon crumbled dried sage leaves
2 pinches of dried thyme
200g - 250g chestnut mushrooms, chopped
½ cup cashews, roughly chopped
½ cup walnuts, chopped
1 teaspoon tamari or soy sauce to taste
Sea salt and freshly ground pepper to taste
1 cup cooked brown rice
½ cup, cheddar cheese, grated
1 egg
½ cup breadcrumbs
Method
Heat the oil in wide pan. Add the onion, crumble in the herbs and cook over high heat, stirring frequently until the onion is golden in places and starting to soften. Add the mushrooms and nuts and cook, stirring, until the mushrooms have released and then absorbed their juices, after several minutes, stir in the tamari and seasoning. Transfer the mixture to your food processor, add the rice, cheese, egg and bread crumbs and pulse so that the mixture resembles minced meat. To cook, coat a wide non-stick pan with oil. Scoop out ½ cup measures, then add it to the pan and press down with a spatula so that the patties are about ½ inch thick. Fry over medium heat until brown, then flip over and cook the other side until golden. Recipe adapted from Deborah Madisons Vegetarian Suppers.
PS forgive me with the American cups and gram measurements. I'm all over the place with them, especially when it comes to converting them to one or the other.