On our way back to Scotland the thought of food started to enter my head. What were we going to eat when we got home as I would be too tired from the seven hour journey to cook from scratch. I am not one for take away meals either, so that was not an option, nor were chips, I've had them twice while at Ds parents. So we stopped at Westmoreland Farmshop which is in Cumbria near the Lake District, about 20 minutes from the Scottish border. It is a much nicer stop than those faceless Motor Service Stations.

I picked up some brown bread that was still warm from the oven and three vegetarian cheeses. I was really impressed with the way Westmoreland Farmshop labelled it cheeses, everything that was suitable for vegetarians was clearly labelled as vegetarian, unlike I J Mellis Cheesemonger in Glasgow were you have to keep asking what is vegetarian and what is not, that after awhile you feel like you are being a nuisance. The other thing I liked was when we got back home, all the cheeses were clearly labelled, something else that I J Mellis seems to have lapsed on my past two visits. I will have to say something next time as the cheese sold there are not high street prices. 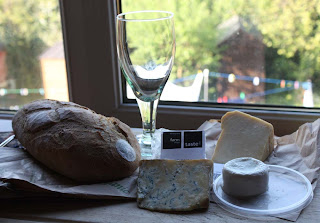 Anyway, the three cheeses from right back to left are: Smoked Cuddys Cave; Stumpies; and Blue Wensleydale.

I was looking forward to enjoying these with a glass of wine, but we then realised that we had no bottle at home, and we were both too tired to go back out again, so no wine.