Not Welsh Red Dragon Pie, but just as good

Vegetable growers all over the U.K are beginning to grow sweet potatoes either in greenhouses or under polytunnels, but for the likes of me where space is a premium, I still have to buy them. The season for sweet potatoes is October to March, but here you will be able to find them all year round, usually imported from America.

There are two types of sweet potatoes, one with pale cream flesh, and the other bright orange flesh. I like using the latter, but it was not an immediate liking of the vegetable, it was taste that developed with time. Sweet potatoes have a very creamy texture that makes them ideal for savoury dishes. One way I like eating sweet potatoes is baking them; or roasting them. 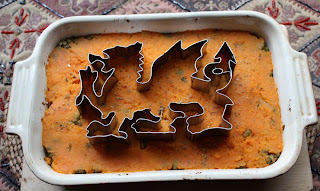 This pie started off as as a version of Welsh Dragon Pie (adapted from Sarah Brown's Vegetarian Kitchen).  This vegetarian Welsh Pie is traditionally made with aduki beans fondly called by some Chinese people as "red dragon" or "red wonder" beans. For this recipe I had also decided to make it with Sweet potatoes instead of mashed potatoes, I thought the orangey-red of the sweet potato would be a nice touch.

After having cooked the beans and ready to assemble the dish, it dawned on me that I had cooked with mung beans, not aduki beans. Obviously, I wasn’t thinking, but the result was still really nice. 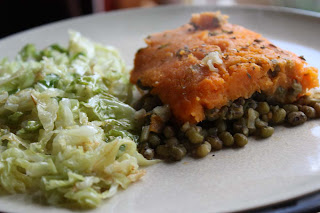