Oh I woke up with a really sore back today, all that digging and weeding from yesterday has taken its toll on me. I could have stayed in bed all morning, but had work get up and earn some pounds to pay the bills. 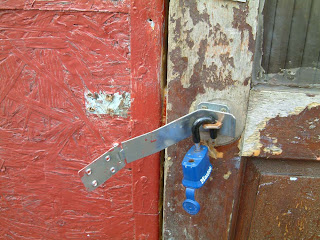 D had spent most of the afternoon at the allotment. The factory owner who had the break in had told us that the police may be interested in speaking to us about our busted door as it was a certainty to be linked. As D was off work for the Easter holidays, he decided to make himself available for the afternoon.

While D was at the allotment site, he had single handedly cleared the entrance pathway of dumped window panes and broken glass and rubbish. He said he was fed up with it, not only was it contributing further to the ugliness of the allotment site, it was also a safety hazard, especially as we now have a number of plot holders with young families. This is something that the committee should be addressing, they ought to be putting their foot down and halting this dumping, but unfortunately no one here takes responsibility for setting standards and maintaining the allotment site.

However, saying that there are a handful of people like D who will go the extra mile to make the place a little bit better for everyone. There is wee John and Wullie, both whom you will find mowing the pathways, and Polytunnel Alan who will cut down overgrown weeds, and Big George who will secure the outer parameters so that vandals don’t get in.

But the rest of us including me (I am sorry to say) are only interested in what is happening on our plot or directly outside of it. I used to help out when I first got my plot there, but then I noted the volunteers helping out were always the same 6 people, I got fed up of being exploited to weed this area and move this and that from here to there, while others were never ever approached to help out. The last time I helped out both with contribution of vegetables and support with my labour power was at the Open day in September. D has continued to be supportive non stop.