I never used to like figs when I was a child.  I found them dry and the sandy grain like texture rather off-putting next to my teeth.  Now I get excited when I see fresh ones all the way from warmer climates like Cyprus or Turkey, though I have learned from my lovely blogger friend Choclette that she had recently foraged for some (British) local figs - all I can say is Wow!  The weather in the U.K this year has been unbelievably hot, so I should not be that surprised really, but I was. 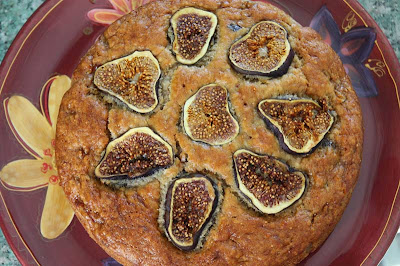 I wasn't as fortunate though as I plucked four of these little bronze fruit bombs from the market a little while back.  I have to be honest I had forgotten about these fresh figs and noted them only this morning nestled in the fruit bowl next to three hardcore pears from my mothers garden.  What to do with these tender and ripe fruits now?  I certainly was not going to waste them.  I remembered a fellow bloggers recipe that I had bookmarked a little while ago for a Banana and Fig Loaf. 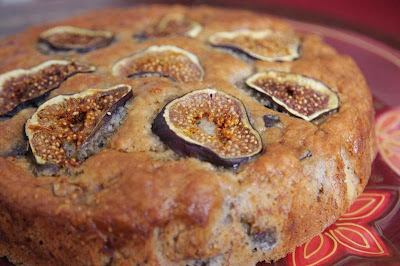 Whilst making this cake, I kept thinking of my late father in law and him reaching out and eating a fresh fig straight from a tree in Cyprus.  He shared with me once that it made him often angry when he saw figs fallen onto the ground and then downtrodden by all who walked over them.  Figs were often overlooked and got wasted because they were so abundant in Cyprus, yet in the U.K they are often quite pricey, prices extortionate at some places.  He was right.  The only kind of figs I would eat back at home in the U.K were the dried ones. 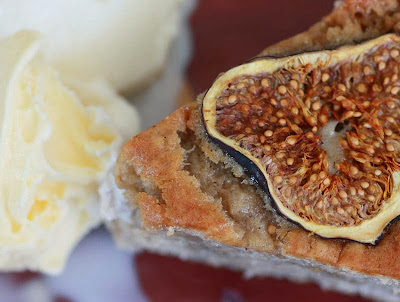 Once cooled the cake has a slight slight sheen sticky look, a bit like toffee pudding.  I absolutely adored the flavour of this cake. Not only was it dense and moist, it reminded me of those honey jars you bring back from your holidays, you know the ones filled with fruit and nuts.  Upon tasting it, D too was bold over by it.  In fact, he begrudgingly let me send some of this cake over to my nephews and nieces.  Some who later confessed to me via the mobile phone that it didn't appeal to them visually.  The figs just looked to darn healthy for them, but once they took a bite,  they described it as lush!  Yes a word they use a lot, but I will take it as compliment. 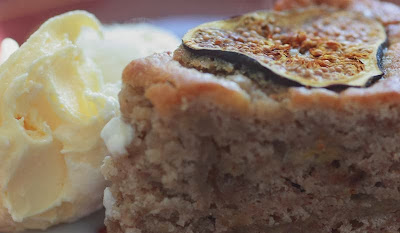 I am sharing this recipe with Jacqueline of Tinned Tomatoes who is hosting Septembers Edition#28 of Bookmarked Recipes: a monthly blog event initiated by Ruth of Ruth's Kitchen Experiments and One Ingredient with Laura of How to Cook Good Food and  Nazima of Franglais Kitchen who are featuring walnuts this month. 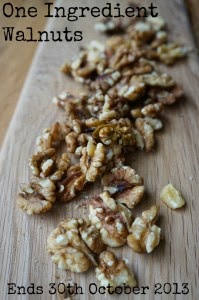 Fresh Fig, Banana and Walnut Cake
Serves 8
Ingredients
60g butter, melted
140g golden caster sugar
1 tablespoon runny honey
2 ripe bananas, mashed
1 egg
220g self raising flour
1/2 teaspoon allspice
2 fresh figs, chopped
60g walnuts, chopped
2 fresh figs, thinly sliced
Optional: Icing sugar for dusting
Method
Pre-heat the oven to 180oc.
Grease and line  a 1lb loaf tin. or an 8 inch round tin, lined with baking parchment paper.
Cream together the butter, sugar and honey. Then beat in the egg and keep beating until the batter becomes pale. Next stir in the mashed bananas.
With a metal spoon fold in the flour and allspice. Stir in the chopped figs and walnuts until well combined.
Pour into the tins, scraping all excess batter.  Then top the batter with the sliced figs.
Place in the oven and bake for 45 - 50 minutes or until a skewer inserted in the centre comes out clean.  When ready to serve, sprinkle lightly with icing sugar.  Bookmarked and slightly adapted from Lemony Loves Baking.