A few weeks ago, I missed participating in Johanna's Nut roast Challenge. Not everyone likes nut roasts and that includes vegetarians.  Its seen as old fashioned and a throwback to 1960s-70s vegetarian cuisine, but I actually think they do still have a place in in this day and age.  Anyway, this month Johanna is also hosting the Breakfast Club event #11 on her blog Green Gourmet Giraffe. The Breakfast Club was initiated by Helen of Fuss Free Flavours.  The challenge for May is to create a savoury and vegetarian breakfast.

Well as some of you may know,  I often indulge in a proper cooked vegetarian breakfast, especially at weekends. For me this can be a veggie fry up or waffles galore.  This time though, I thought I’d go one better and make it all vegan.  My chosen recipe was Buckwheat waffles with a mushroom gravy sauce. 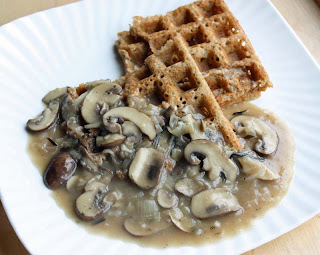 Another excuse for making these buckwheat waffles was my rather large packet of Black Buckwheat flour. The 'Noir' or black in the buckwheat simply means it contains the hull which makes the flour look darker - Just imagine wholemeal flour, well I guess this is Wholemeal Buckwheat flour.  I picked up the flour whilst on holiday in Brittany last year, land of galettes and savoury crêpes and its still unopened.

I don't know about you, but I have a really bad habit of not using ingredients (sometimes expensive ingredients) and keep them stored well; as if they are an antique of sorts that will gain value if left unopened.  Obviously this is not the case, as they go past expiry date and end up down the sink or in the bin.  In my store cupboard I also have Carob Syrup from Cyprus, Violet Syrup from France, Tiger Nuts when I was in Whitby, Welsh Laverbread from my nephew, Irish Carragheen, Carob flakes, Liquid Smoke, White Poppy Seeds, Barley flour, Sorghum flour, Chestnut flour, the list goes on. 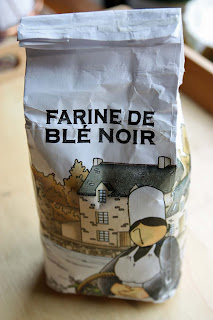 Back to the recipe.  This was my first ever vegan waffle attempt, though cooked through, I had to prise the waffles out from the waffle iron. The mixture was a little thinner than the eggy versions. Also when cooked, the waffles didn't look like its eggy counterparts that are puffy and airy.  I also noted that the waffles had lots of air pockets. I wondered if this was because of the black buckwheat flour and the result may have been lighter had it been just plain buckwheat flour.  This did not affect the taste though which was nutty.  There was also a sweetness that I am guessing was coming from the soya milk. The Mushroom Sauce was especially nice, and one I can see being ladled over some new potatoes and green vegetables like Brussels sprouts. 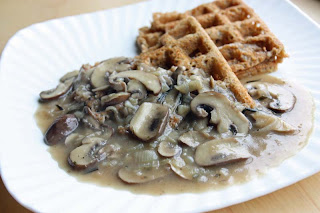 For the Tarragon Mushroom Gravy
Ingredients
2 tablespoons olive oil
4 shallots, finely sliced
2 garlic cloves, crushed
250g chestnut mushrooms, thinly sliced
Salt and pepper to taste
240ml/1 cup vegetable stock
1 rounded tablespoon plain flour
Optional: 1 tablespoon dried tarragon
Method
Heat a large pan over medium heat and saute the shallots in oil until soft, then add the garlic and cook for a couple of minutes. Stir in the mushrooms, tarragon and season to taste. Cook on medium heat until the mushrooms begin to soften.
In a measuring jug, measure out the vegetable stock and stir in the flour ensuring that there are no lumps. Then pour the stock into the shallot-mushroom mixture and gently simmer for 8 – 10 minutes or until the mixture becomes gravy like – thick and creamy.
Whilst the mixture it transforming into a thick gravy, make the waffles according to your waffle mixture.
Then plate up and gently ladle each plate with the mushroom gravy.  Adapted from Vegan Brunch by Isa Chandra Moskowitz.