Korean Bibimbap is a popular Korean rice dish. It is served out as shown: rice in the middle and then surrounded by a number of side dishes. 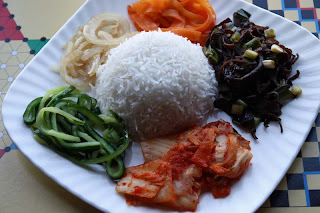 The idea is that you then take your chopsticks and mess it all up. Korean Bibimbap usually comes with a fried egg on top, but as you can see there was so much on the plate I decided to omit it. 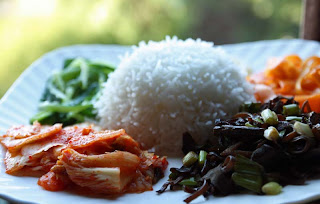 My real reason for wanting to make this dish was Kimchi.  As soon as I became aware of this spicy crunchy, pickled vegetable, I was excited and set out to seek some at the Chinese supermarket.

Kimchee, Kimchi; or gimchi is a traditional Korean dish of raw fermented and highly seasoned Cabbage or White Radish.  It is often made from Chinese Cabbage, but you will find kinchi made from other vegetables such as aubergines, pumpkins, turnips, spring onions and cucumbers.  When served as a side dish in Korea, Kimchi is known as a banchan.  It is common, in Korean cuisine, to have many banchan served alongside a meal. Main courses may be accompanied by up to twelve side dishes. Of all those plated, Kimchi is said to be the most popular. To demonstrate how passionate Korean people are for their kimchi and how it central it is to Korean cuisine, there is a  museum called The Kimchi Field Museum located in Seoul that is completely dedicated to it. Follow this link if you want a tour of the museum, and are interested to learn more about kimchi. Be warned its quite long, so don't feel you have to watch it all. 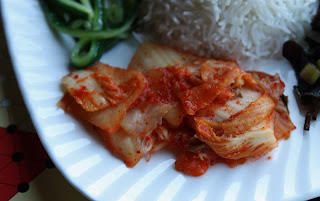 Well I actually liked the Kimchi, though I have to admit it may have been much better had I made it myself.  It is something I will definitely be making from scratch especially as the Chinese Cabbage and radish versions can easily be made at home.  I was surprised to learn that D wasn't that keen on it, especially as he likes his pickles.

Back to the other side dishes.  I liked them all, except for the spring-onion mushrooms made from dehydrated black mushrooms.  I felt like I was chewing on an elastic band. But other than the mushrooms, I did enjoy my generous plate of Korean Bibimbap. 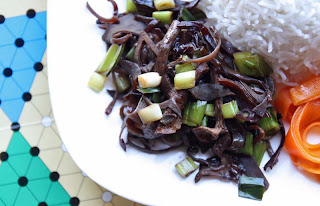 This recipe comes from Another Dinner is Possible written by Isy and Mike.    Isi is of Korean heritage hence the inclusion of veganized Korean recipes, for which I am most appreciative.  Isi has not given a written recipe per se with measurements, but writes 'use any of the following, varying colour and textures - depending on how much you use amounts will vary’.

- A handful of dried mushrooms, soaked, squeezed dry, sliced and fried in sesame oil with chopped spring onion and soy sauce.
- 2 carrots, peeled and then either julienned or or strips of carrots made with a potato peeler, stir fried in oil with some salt and a little water.
- 1 onion stir fried in oil with salt
- ½ cucumber, julienned, sprinkled with salt and left for 20 minutes, rinse squeeze dry and stir fry.
- A handful of kimchi, shredded 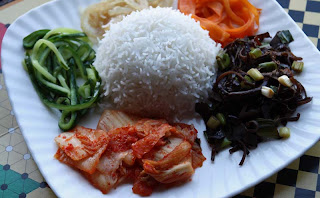 Arrange all the prepared vegetables separately side by side in circle on a place.

To elevate the dish further, serve it with gochujang, a spicy and slightly sweet red pepper paste made with miso. It can be used as a seasoning, a dip for the rice or as a relishes the only.  Recipe from  Another Dinner is Possible by Isy and Mike