A few weeks ago, I found myself perched on the settee watching one of the satellite food channels, showing an American celebrity chef checking out fast food outlets. In this one episode, he was at a Lebanese cafe. The chef showed a tray of baked Kibbeh. This way of making kibbeh was completely new to me, I’ve always known kibbeh to be torpedo shaped shells filled with minced meat or vegetables – taking time, effort and a lot of love to make.

Kibbeh is a middle eastern snack. For those of you not familiar with kibbeh, well think of falafels. But these are made with fine Bulgar wheat. The outer shell made from Bulgar wheat is shaped into a torpedo and then filled with minced meat, pine nuts and then deep fried. Nowadays, you will find so many variations, including vegetarian versions: red lentils, pumpkin, spinach, raisins, labneh, feta, mint and walnuts.

Well I thought, I’d have a go at making Kibbeh using the minimalist approach - as a tray bake. In this version I have used chickpeas and aubergines, two popular Middle Eastern ingredients.  I suppose I could have used TVP - Textured Vegetable Protein aka soya mince in place of the minced meat, but I am still working my way through my pantry, plus aubergines are in season. 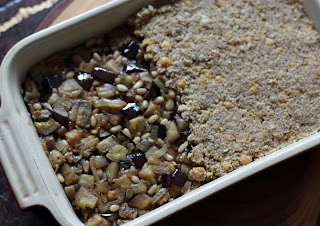 It is said that the best way to eat traditional Kibbeh is wrapped inside a lavash or pitta bread. However as I have chosen to make it in the style of a tray bake. Perhaps the best way to serve this one up is with some salad and a light tahini or pomegranate dressing.

The Aubegine and Chickpea Kibbeh tasted like grainy savoury pilau – delicate flavours of cumin coming through, velvety texture of the aubergines and crunch form the pine nuts.  Although the textures and flavours were warming, I have to admit I wasn't completely satisfied with final result.  For a start it looked rather sandy, not very appealing to the eyes.  Secondly, the Kibbeh fell apart when served. I think I will have to have another go at Kibbeh, just with a different recipe, or even have a go at making Kibbeh in the traditional manner - as deep fried torpedo's. 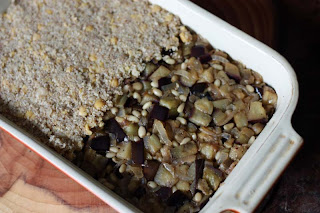 Aubergine and Chickpea Kibbeh
Serves 6
Ingredients
100g fine Bulgar wheat
450ml hot water
1 x 400g can cooked chickpeas, drained and rinsed
1 generous teaspoon ground allspice
½ - 1 teaspoon ground cumin
Salt and pepper to taste
2 tablespoons olive oil
1 large onion, peeled and minced
1 medium aubergine, chopped
55g pine nuts
1 tablespoon pomegranate syrup or lemon juice
Method
Place the Bulgar in a heatproof bowl. Add the hot water and let it stand for 20 minutes. Drain well to remove excess water. Return to the bowl. Coarsely chop the chickpeas and add to the Bulgar. Add the spices and season with salt and pepper to taste. Stir to combine and set aside.
Heat the olive oil in a wide pan. Add the onion, cover and cook until softened. Add the aubergine and continue to cook stirring now and again until the aubergines are tender. Stir int he pine nuts and syrup and season with salt and pepper to taste. Set aside.
Preheat the oven to gas mark 6. Press half of the Bulgar-chickpea mixture into the bottom of a lightly oiled  baking dish, smoothing the top. Add the aubergine mixture, then cover evenly with the remaining Bulgar-chickpea mixture, pressing down until smooth. Bake until hot and lightly browned, about 30 minutes. Remove from the oven and let it stand for 10 minutes before serving. Serve warm or at room temperature. Adapted from Vegan Planet.