Its been raining on and off, but its not the rain that's bothering me today its the blustery gale force winds.  Across the West and Central Belt of Scotland there have been severe weather warnings of high winds that will cause disruption and destruction.  And its true, the wind has been gushing all day at 70 - 80mph.  In some parts of Scotland homes are without electricity as power cable lines have come down, trains have been cancelled and trees have fallen.  From my own window, I've watched our bird table topple over, plants pots being flung from our garden into the neighbours.  I've also watched peoples bins being knocked from their front gardens and then scuttle down the road.  I am fretting that the recent roof work will be damaged with slates being dislodged and then knocked down and the costly repaired leaking roof will continue once again.  Unfortunately, our upper cottage flat is at the bottom of the street and when they come: that is the wind and rain, they give it a mean battering.  I am trying my utmost not to think about it, but its really hard not too when its loud, harsh and knocking literally (swaying tree branches) on your windows. 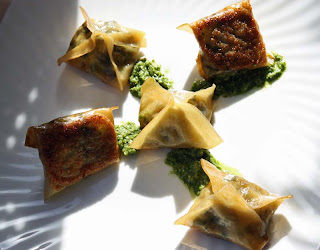 These pot stickers were much more golden and crispier than my first attempt.  It has a simple filling of red lentils and chard.  The Swiss Chard is from my own garden plot and the lentils from my shrinking store cupboard.  I accompanied the pot stickers with a coriander dipping sauce.  My oh my, not only was it heavily ginger scented, the ginger dominated the usually overpowering coriander.  I have to admit, I wasn't too keen on the dip and may in future make a different lightly spiced dipping sauce.

I am sending this 'Red Lentil and Chard Potstickers' to My Legume Love Affair. MLLA was founded by Susan of The Well Seasoned Cook. This month MLLA #35 is being hosted by Smitha of Kannada Cuisine. 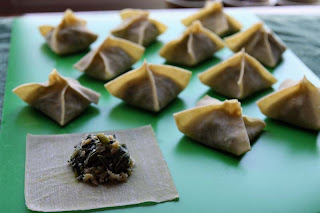 Lentil and Chard Pot stickers with Coriander Dipping Sauce
Makes about 18 - 24
Ingredients
4 tablespoons olive oil
2 teaspoons mustard seeds
8 spring onions, chopped
Handful of chard or spinach, shredded
2 teaspoons fresh ginger, grated
75g dried red lentils, cooked
Salt and pepper to taste
Packet of Wonton wrappers
2 tablespoons peanut oil
1 tablespoon Tamari or other soy sauce
200ml water
Method for the wonton parcels
In a large pan, warm the oil over medium heat. Add the mustard seeds. Saute the seeds until they start to pop, then add the spring onions. Cook , stirring well, for a couple of minutes. Stir in the chard and then the ginger. Mix well. Cook until the chard has wilted. Stir in the lentils and season to taste. Cook for about five minutes, then remove from he heat and allow to cool. 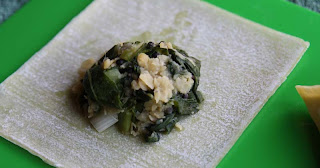 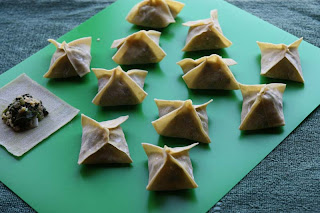 Heat 1 tablespoon of the peanut oil in a large non stick pan over medium-high heat. Place dumplings in the pan, you will need to do this in batches as you do not want to crowd the pan. Cook for about 3 minutes, until golden. Stir in half the tamari, then half of the water. Cover and reduce the heat to medium and cook for 5 minutes. Uncover and cook until the water has evaporated. Repeat with the remaining dumplings. Serve immediately.  *If you don't want to make pot stickers, you can steam these dumplings in a steamer for 4 - 7 minutes or until firm, but still tender. 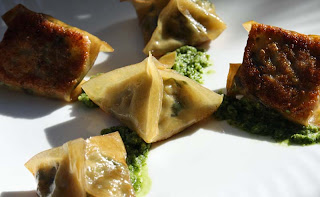 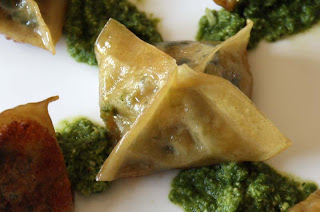 Method
In a blender or food processor, combine all the ingredients. Blend until smooth. If the sauce seems to thick, add enough water until you have reached your desired consistency. Recipe adapted from Food From the Spirit Manuela Dunn Mascetti.