I am always filled with anger and disappointment when I read or hear of cultural insensitivities or worse, people’s basic lack of common sense, to treat each other with some dignity and respect. In the past I have wrote about how my soup was not 'suitable for vegetarians'; and my marshmallow experience. Well yesterday I saw this article on my blog sidebar.

At this works buffet, 'Scotch eggs' were labelled as an option 'suitable for vegetarians' and suitable to consume by those of a particular religious background, in this case Muslim employees. In actual fact, these 'Scotch eggs' were not suitable as they were made from pork. I would personally have terminated the contract of the caterers, but no apparently this organisation offers the offended employees who had eaten the meat product, a cup of tea. 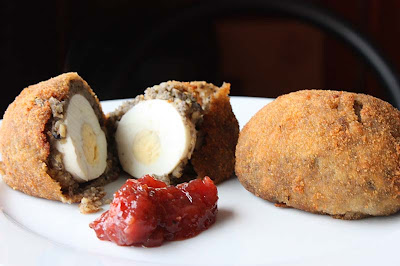 The sceptic in me would not surprised if this was done out of malice; or for a joke by one of the caterers staff members. I mean anyone who has been raised in the U.K or gone to any traditional British buffet will know that the 'Scotch egg' is a hard boiled egg covered in sausage meat made namely from pork, then coated with breadcrumbs and deep-fried. Scotch eggs can be eaten hot or cold and are often served at parties, cold buffets and picnics, similar to the pork pie. Therefore not suitable for people with particular diets.

I remember at Primary school witnessing and experiencing bullying behaviours from other children, specifically towards Arabic or South Asian children like myself, and in particular those who were Muslim, easily identified by dress. Other than the racist jibes that were deemed normal part of growing up for children of colour in this part of Wales, the other jibes you would often hear would be ‘do you wanna pork pie’. This wasn't a question, it was deemed an insult aimed primarily at the Muslim children who religiously were forbidden to eat any part of the pig. At night, the cowardly racist adults would throw bits of pork pies at the windows of Muslim homes, and at the small Jewish community, it would be eggs. I don’t think this kind of behaviour has disappeared, in those days it was direct, nowadays it is subtle. 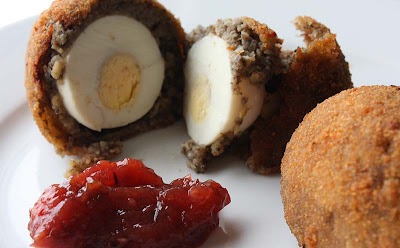 Anyway, back to the above article/incident – I also do think the Muslim employees should have used their personal judgement and commonsense too, as sometimes the offering of complimentary food tempts us to overlook our dietary convictions, sometimes it easy to blame others afterwards, rather than take personal responsibility at the time. 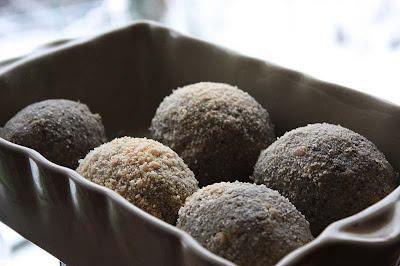 Personally, I have liked the ‘idea’ of the Scotch egg. I have always liked crispy things, and admired the deep fried coating of the scotch egg. I had always wanted to make a vegetarian version and had read numerous ways to do this, with nuts, beans and pulses, but I wanted to include a vegetable, a fungi in this case. So here is my take. This was originally a Pâté , as I had made too much (double the quantity), I decided I could use the remaining Pâté to mould a hard boiled egg, coat with breadcrumbs and deep fry and there you have it my vegetarian 'scotch egg'. 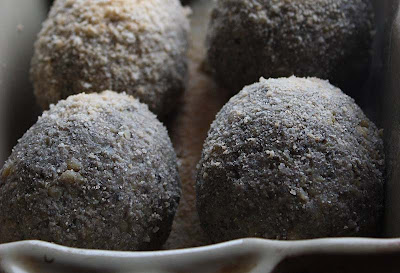 Mushroom coated 'Scotch eggs'
Makes 6 eggs
Ingredients6 hard boiled eggs
½ cup of yellow lentils
1 bay leaf
40g butter
1 small onion, finely sliced
250g button mushrooms, minced
½ tablespoon of finely chopped soft herb (oregano, parsley or coriander)
Salt and pepper to taste
Breadcrumbs to coat
1 beaten egg for dipping
Vegetable oil for deep frying
Method
Place lentils and bay leaf into a pan and cover with cold water. Cover pan and simmer for 40 minutes or until lentils are soft. Drain well. Melt the butter in a pan over low heat. Add onion and cook for a couple of minutes, then add mushroom, oregano, lemon juice and seasoning. Cover and cook on a low heat until mushrooms are soft. Combine well drained lentils and mushrooms mixture into a food processor and blend til the mixture is relatively smooth, be careful not to puree it. Allow to cool. Divide the mixture into six, then take a handful and pat it in your palm, gently covering the hard boiled eggs completely. Leave in fridge for up to an hour to firm up. When ready to eat, bring back to room temperature (don't miss this step or the coating will split whilst deep frying) before dipping in beaten egg, coat in breadcrumbs and deep fry till golden.

I served these with beetroot chutney and home-made piccalilli. Now why didn’t the caterers think of this?!