From the Indian Subcontinent to Scotland with love

Or is it the other way around…

Over the past few years there has been much interest in the haggis fritter, vegetarian haggis pakora or bhaji, and even haggis samosa with various TV food shows making noises about it. I first tasted the vegetarian haggis samosa in Edinburgh and really liked the idea and the flavour. Recently I introduced it to my nephew, who wasn't as keen on it as I was.

I was first introduced to haggis pakora by a Scottish friend of Pakistani heritage in 2001 when she brought in a tray of savoury delights, amongst them were these tasty little morsels. I was well impressed with how many South Asian families, whether Sikh, Hindu or Muslim had incorporated some uniquely Scottish flavours into their cuisine, hence Scottish South Asian fusion food. There is even a 'curried black pudding' recipe, but I won’t go there, unless of course it’s made with the vegetarian version of black pudding. 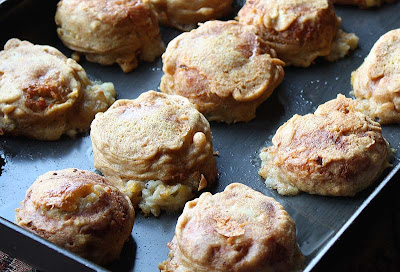 Anyway in the tradition of my South Asian Scottish friends, last week with the left overs from my St Andrews day meal I had decided to create a fusion dish too. I decided to make some ‘clapshot vegetarian haggis tikkia’. For the uninitiated, imagine deep-fried potato cake covered in a spicy batter and you will get the picture of what this dish would be like. I was confident that these savoury bite would be a success, as my Welsh Glamorgan pakoras and even those I made with Welsh Caerphilly cheese early in the year had been, but the true test is the opinions of others, I hoped they would approve. 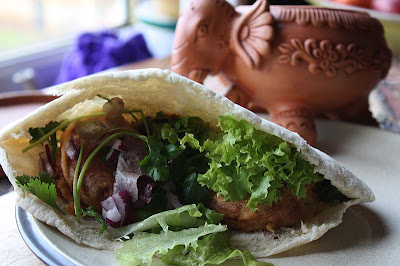 I served these in pitta bread, but burger buns will do just fine too; however please note aloo tikkia are traditionally eaten with plain roti’s. And what was the verdict. They got the thumbs up and were described as a 'splendid culinary fusion of two cultures' by whom? My nephew of course! I know, I know he is biased. If you get a chance to make them, please do, and give me your verdict. 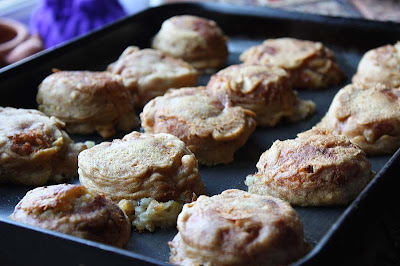 I had left the cooked tikkia in the oven to stay warm, but they were in there too long and some had burst, but this did not impact on the flavour, just the way they looked.
Clapshot Vegetarian Haggis Tikkia
Makes 12
Ingredients
Follow clapshot recipe here, but reduce quantity by half and allow to cool*. Then add about 225g of cooked vegetarian haggis, 1 finely sliced green chilli (deseeded if you wish) and 1 small onion, finely sliced. Combine well using your hands. Now take a small handful of the clapshot haggis mixture and shape into flat cakes, you should get about 10 – 12, depending on size.
150g gram flour (also known as chickpea flour)
½ - 1 teaspoon chilli powder or to taste
1 generous teaspoon garam masala
1 teaspoon Aijwain seeds also known as Bishops Weed seeds) available at most South Asian stores.
Season with salt as required
Water as required
Vegetable oil for deep frying
Method
Mix all the above ingredients except for the oil, until you have a dropping and coating consistency. Set aside. Pour in enough oil in a pan till it reaches about ½ inch up the side. Heat the oil. Gently dip each tikka piece into the gram flour batter to coat and then gently drop in tikka pieces, cook on one side until golden about 3 minutes, then flip over and cook other side. Once cooked, remove from the pan and place onto a kitchen towel to drain excess oil before serving.
*As I made these clapshot haggis tikkia with leftovers from my St Andrews day meal, I had to guess the ingredient quantities in the recipe, so if you do decide to have a go, please check consistency and alter accordingly.