Cranks was one of the first vegetarian restaurants that appeared in Britain. It opened its first restaurant in 1961 in the famous Carnaby Street and soon earned its reputation as the place to eat for vegetarians. But by the 1980s and 90s, the stereotypical image of the vegetarian as sandal-wearing-lentil-loving-hippy was apparently holding the restaurant back, so the chain had to transform the way people saw vegetarian cuisine and 'vegetarians'. The chain also faced competition with the increasing availability of vegetarian food, not just by other vegetarian outlets, but by mainstream supermarkets too.

I have never eaten at Cranks (as all the restaurants were located in England), but have most - if not all of the cookbooks. I liked the Cranks traditional image of hand-thrown pottery and heavy wooden chairs presented beautifully through some of their books, something that modern day restaurants try to accomplish with new furniture and decor. But unfortunately, after years of serving wholesome, flavourful and hearty dishes, Cranks closed all its outlets in January 2001. I think there is now only one restaurant, in Dartington, Devon. If I should ever venture that way, I will be paying them a visit as it is a vegetarian culinary British institution.

Anyway, after that history lesson on Cranks I guess I should let you know what a Homity pie is?! Homity pies were one of the most popular dishes served at Cranks. I would describe homity pies as an open shell pastry with a potato filling. I have read two different stories about the origins of the homity pie. One states it was an old English economy meal recipe from the Second World War, the other says it was a Romany speciality. To keep up with the changing times, the homity pie had also gone through a number of transformations at Cranks: the potatoes were mashed and made without the pastry case; or flavoured with Tamari and Tabasco.

Well yesterday afternoon I had decided to make some Cranks style homity pies. It is a little time consuming as you have to make the wholemeal pastry, rest it in the fridge, blind bake it and then it’s onto the potato filling - that is why I decided to make it the day before. 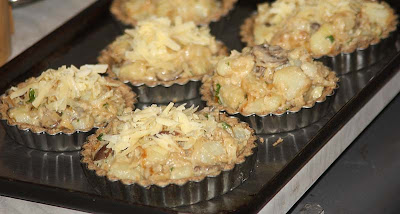 My recipe is based on Nadine Abensur's 'traditional' Cranks recipe that was brought into the 1990s, but I have added a small pinch of spice to take it a little bit further. My sincere apologies to those who adore the 'real traditional Cranks pie', but do give this a go - you may just like it.

Cranks Homity pies – the spiced way
Makes 6
Ingredients
For the pastry
175g wholemeal flour, plus extra for dusting
Salt
100g butter, plus extra for greasing
2 tablespoon iced water
For the filling
600g potatoes, chopped into cubes
1 clove of garlic, minced
40ml olive oil
375g onions, finely sliced
125g chestnut mushrooms
½ teaspoon of chilli or cayenne powder
1 teaspoon of garam masala
100ml double cream
125g mild cheddar cheese, grated
1 tablespoon chopped coriander
Salt and pepper to taste
Optional sprinkling of cayenne powder
Method
To make the pastry
Sift the flour and salt into a bowl, folding the bran back in. Rub the butter into it and add the water. Once you have brought the dough into a ball, wrap it loosely in cling film and leave it in the fridge for 30 minutes.
To make the filling
Boil the potatoes until tender then drain and set aside. Fry the onions and garlic until tender and translucent. Add the mushrooms, chilli or cayenne pepper and cook for five minutes, then add the potatoes and cook for a couple of minutes. Finally add the double cream, then remove from the heat and add half the cheese. Season with salt and pepper and cayenne pepper if using, add the coriander and allow to cool before spooning generously into pastry cases. Scatter the remaining cheese generously all over and bake for about 20 minutes in the oven. These can be eaten warm or at room temperature. Adapted from the Cranks Bible.

Finally, to end, this morning I learned that the homity pies are making a comeback and are now being sold at selected Waitrose stores, but why would you want to buy them when you can so easily make them at home, ah I guess there are times when you don’t get round to making your own.