I know there are lots of fruit and vegetables to choose from right now, yet I'm still making hearty grub with store cupboard ingredients, but its not all jumping beans, there are some peppers in this.

This Black Bean Chilli was gorgeous, the black beans just melted in your mouth and the peppers still had some bite.  I especially liked the red sauce that was surprisingly neither sweet or spicy, then it all changed - the chocolate went in altering the aroma, taste and look of the sauce completely.  It became somewhat meaty, a tad bitter and looked like thick glossy gravy. Perhaps it is meant to be this way, reminisce of Mexican mole sauce, or maybe the chocolate I used which contained cocoa nibs was too strong for the dish, regardless I've decided that I won't be making this particular recipe in a hurry, well at least not with the chocolate as I found its addition too rich for my liking.  We mellowed the rich flavour by topping it with some grated cheddar cheese and serving it with some plain boiled rice. 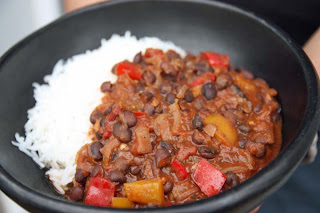 This does not mean that the 'Black Beans and Chocolate Chilli' won't be to your taste, you may find that you like its depth of flavour and richness. If not, you can also make this without the chocolate if you wish, I know that is what I would do.  I am sharing this recipe with Seasonal Sunday. 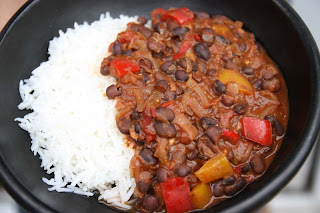 Black Bean and Chocolate Chilli
Serves 4 - 6 as an accompaniment
Ingredients
270g black turtle beans, soaked overnight.
2 tablespoons vegetable oil
3 medium onions, finely sliced
4 cloves garlic, crushed
1 celery stalk, thinly sliced
2 small red chillies, sliced
1 tablespoon ground cumin
2 teaspoon dried oregano
1/2 teaspoon cinnamon
pinch of ground cloves
1 teaspoon ground coriander
1 red pepper, diced
1 yellow pepper, diced
1 x 400g can of tomatoes, chopped
1 tablespoon soy sauce
40g dark chocolate, broken into small pieces
Salt and pepper to taste
Optional: Lemon juice to taste
Optional: Spring onions, chopped for garnish
Method
In a wide pan, cook beans in water until tender.  Drain and set aside.
In a saucepan, warm the oil on medium heat.  Add the onions and garlic and saute until the onions become soft.  Add the celery and chilli, then cover and cook for about 5 minutes.
Reduce the heat and stir in the cumin, oregano, cinnamon, cloves, corainder, pepper and season with salt and pepper to taste.  Cover and cook until the peppers begin to soften.  Stir occasionally to keep the spices from burning.  Then add in the tomatoes and soy sauce cook for about 5 minutes, then stir in the black beans and cook for 10minutes.  stir in the chocolate.  When it has melted, adjust the seasoning if necessary, and add lemon juice to taste.  Garnish with chopped spring onions and serve.  Adapted from Moosewood Restaurant Celebrates.