I have never tried bacon, saying that once a male cousin maliciously gave me a packet of bacon crisps, but when I grew up I later learned it was suitable for vegetarians as the bacon was artificial in flavouring - so that doesn't count.

So it may see, bizarre that a bacon recipe should appear on my blog, albeit it a fake one. In the past D who knows the kind of flavours I like suggested had I been a meat eater that I may have liked pork scratchings, maybe even bacon bits sprinkled on pasta or lentil soup because of its smoky flavours. He may be right, but I’m not tempted at all. I’m happy with smoky paprika crisps and still miss Mesquite Kettle Chips. 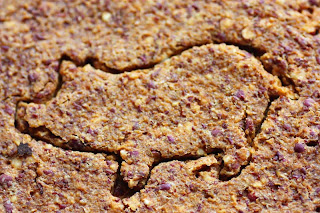 The one thing you always hear from both converted vegetarians and vegans when they give up meat is them missing the texture and taste of bacon, often seduced by the smoky wafts of bacon rashers being fried. This has never ever been the case for me, I have never eaten pig or beef. The only meat I would eat as a child was chicken wings, minced meat and fish. So when I decided to give up meat for certain, it wasn’t really a hardship for me. The only thing I would continue to eat was fish, namely because it was easy for those around to feed me, who’d often think – ah we have a vegetarian coming for dinner, what are we going to feed her? It was just easy at the time and sometimes the polite thing to do. 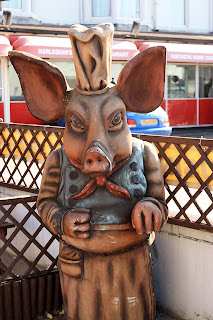 It was whilst at University that I discovered ready made faux meats and substitutes such as TVP, soya chunks, tofu and seitan. However, I was still happy to eat natural and unprocessed food. I’d make my own vegetable and bean burgers, and avoid spending my student budget on these mock meat substitutes. Plus I found many of them rather bland. But mock or faux meat was not easy to avoid at University, I had a verbal agreement with my flat mates and my boyfriend (now husband), we would take turns in cooking.  I always cooked vegetarian meals but always incorporated faux meat such as TVP for texture for their satisfaction. On a side note, I am proud to share that my husband has never ever gone behin my back for a meaty burger, fishy pie or bacon butty.  It is for this reason that this faking bacon is appearing on my blog, he likes it - I mean really likes it. 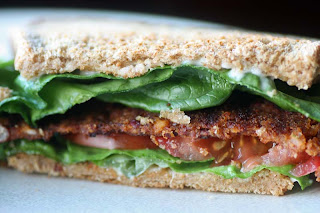 We’ve had variations of vegetarian bacon many times when we’ve eaten out and had a full Scottish or English vegetarian breakfast. The meat free bacon often served to us was made either from tofu; tempeh, or it was these chewy plastic rashers.  On the internet you will find a whole host of vegetarian and vegan variations of mock bacon such as those made from gluten flour; dehydrated eggplant slices; smoked shiitake mushroom bacon; and even coconut bacon.

Around this time last year I was rather excited when I came across an easy home made version made with red beans and buckwheat grains.  I knew it was a star recipe when variations of it started appearing on blogosphere. The original recipe stems from No Meat Athlete.  Both Matt and Christine Frazier have kindly granted me permission to share the recipe with my readers.  What I found really appealing about  this recipe was the dose of paprika, plus most of the ingredients are accessible in the United Kingdom: such as adzuki beans, buckwheat grains, nutritional yeast and coconut oil (check out your nearest South Asian grocers).  The only specialist ingredient you may struggle with is liquid smoke, but I managed to find some in Scotland here and here. It is a bit on the expensive side as its imported, but its worth having in your kitchen cupboards. ﻿
The first time I made these meatfree 'bacon' slices, D commented on the smoky aroma coming from the oven. He said it was not that dissimilar to the smell of the setian chorizo.  When it came out of the oven, the baked beany grain pancake visually reminded me of the raw food spiced crackers that are made in a food dehydrator - virtually no cooking. Its the case here too as this recipe only takes 10 minutes blast in the oven.

After carefully slicing them and removing them from the non stick baking paper, I gave D the honour of frying them in some oil. He made an observation and said unlike the real bacon, these do not ooze out fat. I suggested perhaps I should add some vegetarian suet to the blend next time, he advised me against it and said I did not need to tamper with the recipe at all. Having eaten them a number of times, I completely agreed with him. However over the past few months, I have made one change to the recipe.  The original recipe uses maple syrup, one time I didn’t have any in my kitchen cupboards so substituted it with agave syrup, it worked well.  Another great thing about this recipe is that you can freeze the strips, but I have to say, freezing does alter the texture a little.

I have absolutely no idea if these taste anything like the real meat bacon and had to ask D for his insight. He admitted it did not taste exactly like bacon, but vouched it did an excellent job of mimicking the smell and flavours. We’ve had this meat free 'bacon' a few times now as part of a fried vegetarian breakfast, in and the traditional bacon butty or should I say facon 'bacon' butty.  I have to admit, I can’t quite see it as a rasher of bacon, but enjoy these as a slice of spice in the way I have Terry Romeros's seitan chorizo or Celia's Tofu Biltong. 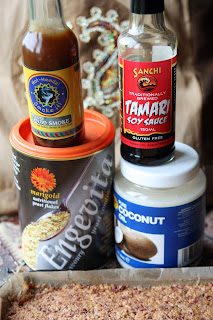 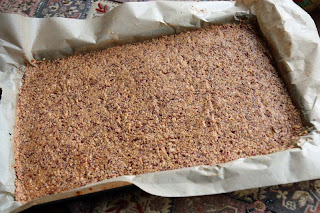 Method
Rinse the adzuki beans and buckwheat, place in large bowl covered with cold water. Leave to soak overnight.
Strain the soaked beans and buckwheat and rinse well. Place in the bowl of a food processor. Add the onion and granules, liquid smoke, nutritional yeast, smoked paprika, Tamari or soy sauce, salt, tomato paste, coconut oil and syrup. Pulse several times to combine, scrape down the sides and bottom of bowl and continue pulsing until uniform but not as pureed as hummus.
Preheat the oven to Gas Mark 6.
Line a 9×13 baking tray with parchment paper and coat pan with baking spray. Place the adzuki-buckwheat mixture on the tray and spread evenly with a spatula.  It will look like its not enough mixture for the tray, but it will spread. 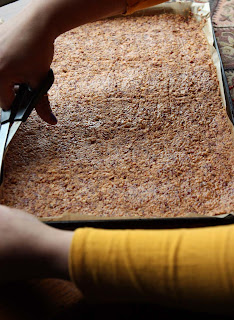 Lightly grease the surface of the mixture with a pastry brush.
Bake on top shelf for 10 minutes. 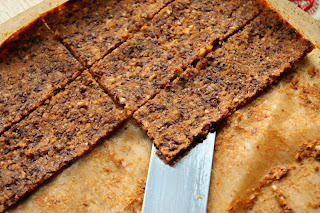 Remove from oven and let cool for 10 minutes, then slice into 16 - 24 strips.
Remove the strips with palette knife or spatula.

To cook: Heat a tablespoon of oil in a frying pan on medium-high heat. Fry the meat free ‘bacon’ slices for 2-3 minutes, flipping once. You can freeze the meat free ‘bacon’, then fry  it straight from  the freezer, there is no need to thaw it. Modified very slightly from the No Meat Athletes Original Vegan Soy-Free Bacon
UPDATE: Fellow Blogger Eileen at Eileen's Kitchen made this in December 2011.  Please check out her Pig-Free BST Sandwich here.