Early last year, I harvested a mound of sprouts from the allotment plot. This year, I did have some Brussels growing in the garden plot with designs to enjoy them on Christmas day, but each and every one of them was decimated by the white cabbage butterfly, my Number 1 garden pest this year. I have decided if I am still limited to growing space next year, I will not be raising any of the Brassica family, (well maybe just one – the mighty kale) as my other plants were also affected by this pest and its offspring.

I've had this 'Brussels Sprouts hash' recipe bookmarked for inspiration, ever since I acquired the book from an Oxfam bookshop. Now that sprouts are appearing at farmers markets and on supermarket shelves, I thought I’d have a go at finally making these. You know what is kind of funny, my blog is about (growing and) cooking seasonal vegetables, but I was once a reluctant vegetable eater. On this vegetable dislike list there has been aubergine, broccoli, cauliflower, okra and now sprouts. On the positive side though, I have attempted and found recipes to make these vegetables palatable for me. A vegetable that once would never land in my shopping basket is now approached in a completely different manner. The hard part now is persuading others to overcome their reluctant attitude towards certain vegetables; or even vegetable based cuisine.

It was only last year, I found my favourite way of eating sprouts. Simply roasted in the oven they are completely transformed from green pellets to caramelised nuggets . Reminds me, I must share that with my brothers, they too never liked their sprouts. I think this Sprouts hash is a close second favourite of mine. 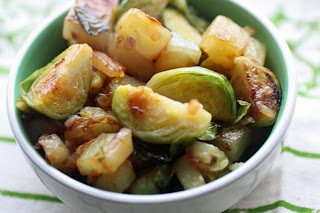 There are a number of Brussels sprout hash recipes on the web. Many of them include bacon or its upmarket sister, pancetta. This however is made without meat, caramelized and turned golden crisp in olive oil. Its good, good, good and that is high praise from me for a sprout recipe.

If you have little ones or big kids who don’t like sprouts, make these and sell it to them as little cabbages. I think they will enjoy them. 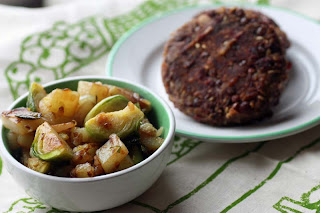 The pan will be overspilling with raw veg at first, but slow cooking is essential here. This may take up to 30 to 40 minutes for the veg to shrink and turn golden soft. So Be patient, it is worth the wait.
Brussels Sprouts Hash
Serves 3 -4 with accompaniments
Ingredients
1 tablespoon olive oil
1 medium onion, finely sliced
2 garlic cloves, crushed
250g Brussels sprouts, trimmed of stems and cut into quarters
1 large or 2 medium potatoes, peeled and chopped into even size cubes (make sure they are chopped to cook in the same time as the sprouts)
100ml water
Salt and pepper to taste
Method
In a large pan, heat the oil. Add the onion, garlic and saute them until soft. Add the sprouts and the potatoes and cook for about 5 minutes moving the vegetables around to prevent from sticking. Then add the water, salt and pepper to taste and cook until the water evaporates. Now turn the heat up and saute the vegetables, shake the pan or stir the vegetable now and again, so that all sides turn colour. Keep doing this, until the vegetables are cooked through. Serve immediately. Inspired by a recipe from Vegetarian Planet by Didi Emmons.