The flavours in this Paprika mushroom and potato pie were quite intense and meaty. If I had not made this with my dark brown hands I would have questioned what stock was used to make it? Beef, chicken or vegetable! A lot was to do with the making of the paprika based sauce, but to add to its intensity was the mushrooms. Most of us will agree that mushrooms reign supreme in the Vegetable Kingdom as the ‘meat vegetable’.

There are a number of paprika powders on the market. In my kitchen cupboards I have Hungarian paprika, smoked parsnip, hot paprika, sweet paprika and standard ground paprika from the South Asian grocers, which is what I used in this recipe. 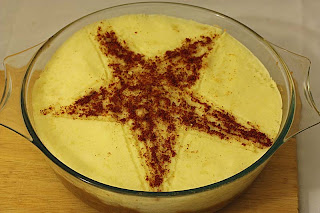 I was just going to keep the mashed potato topping plain, but it looked a bit boring. I went overboard with the sprinkling of the paprika and made a five pointed red star.

If you don’t want to scatter the additional paprika on top, you could mash the potato with fresh thyme or parsley just to lift it visually. I do believe there is some truth in that people feast with their eyes first. You can make this pie in advance. It also reheats well. 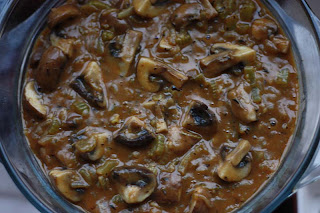 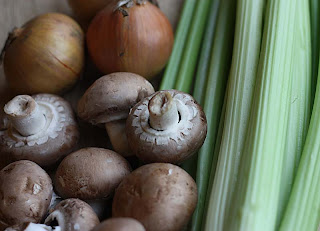 Method
Heat the oil in a wide pan, add the onion and celery and fry gently until the onion is soft and lightly coloured. Add the mushrooms and cook for a couple of minutes. Sprinkle the flour over the mushrooms mixture, stir until well incorporated, then add the paprika, thyme and cayenne. Remove from the heat and gradually stir in the stock. Return to the heat and simmer, stirring constantly, until the sauce has thickened and smooth. Remove from the heat Season with salt and pepper to taste. Pour the mushroom mixture into an ovenproof dish. 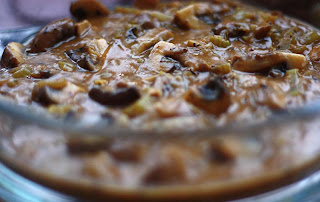 Evenly spoon over the mashed potatoes. Sprinkle with paprika if you wish. Then bake in the oven for 20 – 30 minutes until heated through. Serve immediately.