For those of you may not be familiar with Eccles cakes, they are a particular kind of English cake. Individual flaky pastries filled with either currants or raisins, glazed and coated in crunchy sugar grains. D really likes Eccles cakes, but has struggled to find a good commercial brand.

Eccles cakes are believed to have originated in a little place called Eccles, formerly within the Lancashire boundary but this has been debated by some food historians who argue that similar types of sweet patties were being made elsewhere in England. This photograph is of an Eccles cake bakery was taken when we visited Liverpool last year. 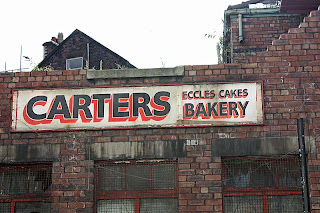 To add to this, these sweet patties are known by different names. I’ve known them to be called Squashed Fly Cake, and even a Fly's Graveyard. I’ve been told that they also exist in Scotland, but in a very different guise: simply as a fruit slice. So it with some reservation that I call these Savory cakes 'Eccles' cakes, especially in the light of recent proposals to protect them and prevent bakers from calling cakes 'Eccles cakes' unless they have actually been made in Eccles. Something else of interest though, the word ‘eccles’ actually means church and is derived from the Greek word ‘Ecclestia’. 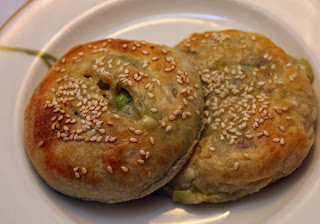 The pastry for this savoury version was light and flaky. The filling was creamy and salty from the cheese, and silky from the leeks. Although I preferred this warm I think these would be good eaten cold too. So perfect for taking to work for lunch or summer time picnics for those of you blessed with sunshine. The sun is rather shy to come out in Scotland, even on summer days. So picnics here are always followed by rain, well that has been my experience so far. Talking of weather, the snow here has finally melted away, but I wonder for how long until the next flurry?! 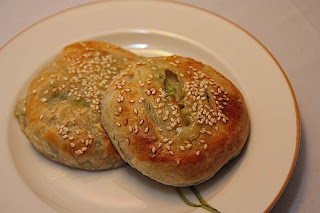 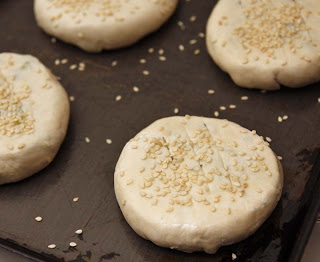 Lay pastry out on a board and first cut out 4 x 5 inch or 6 inch rounds. Then gather the pastry roll out with a rolling pin and cut out a further 2. Divide the filling between the pastry rounds, placing it in the centre of each. Dampen the edges of the pastry and gather the pastry over the filling. Press the pastry together in the centre forming a ball. Turn the balls over and flatten them lightly with a rolling pin. Using a sharp knife, make 3 small parallel cuts in the top of each. Brush the top and sides of the pastry with the beaten egg and sprinkle the sesame seeds over the top. Chill until ready to make.
Heat oven to Gas mark 6. Place on a baking tray and cook at the top of the preheated oven for 20 minutes or until evenly browned. Adapted from Leiths Vegetarian Bible by Polly Tyrer.