First it was Brussels sprouts hash, now its Beetroot hash. Well what can I say, its a good way to eat my vegetables.

I'd like to say these are made with my own home-grown beetroot, but I can't. The beetroot in my garden plot is well covered by the icy layer of snow. Even if I did attempt to dig my way to them, it would be a hard task for me to pull out of the frozen ground. Instead I had to buy some from the supermarket, on the plus side they are organic and grown in Fife, Scotland. 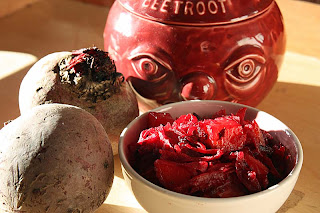 Like sprouts, beetroot is a vegetable that never featured in my parents home. The only version that would make an occasional appearance would be the pickled kind, in a jar. This was often used to accompany a cheese roll. The other time I'd see pickled beetroot was at school for dinner always accompanying clumpy mashed potatoes. So many people seem to have negative experiences of the beetroot, all these stem from vivid memories from their childhood. In order to overcome this dislike and the demise of the beetroot, many cooks and chefs have tried to come up innovative ways to re-introduce beetroot to people again. It certainly has worked. Over the past few years, the beetroot has re-emerged in a number of attractive guises such as: beetroot risotto, beetroot cake, beetroot muffins, beetroot sorbet and even beetroot ice-cream.

Well instead of a sweet beetroot dish today, I thought I'd make a savoury one. I had no regrets, as this beetroot hash was a winner. I was happy to tuck my fork into the soft crimson dyed vegetables and taste its deep root and earthy flavours. I served these with some veggie sausages, a fried egg and a dollop of brown sauce. 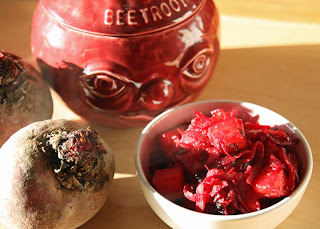 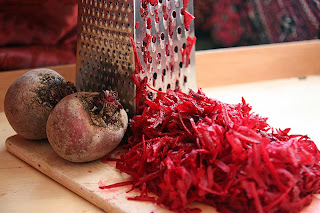 Method
Heat 2 tablespoons olive oil in a large pan or frying pan, add the onion and cook on a low heat until the onions are soft. Add the remaining oil and to this add the potato cubes and fry briskly until starting to brown and soften. When you are certain the potatoes are cooked enough, then add the beetroot. Season to taste with salt and pepper and continue to fry over medium heat, stirring form time to time, until the beetroot is tender. The vegetables should be crisp and slightly mashed together. Serve hot. Adapted from Leiths Vegetarian Bible.