Chocolate Orange Brownies for my heart

I saw some fudgy and decadent looking brownies on Jacquelines blog Tinned Tomatoes. As I read on I learned that the recipe was inspired by fellow blogger Choclette's spicy orange brownies, I've written fondly about Choclette before on my blog, but I am happy to say it again Choclette certainly does come up with some fantastic, innovative and tasty chocolate recipes on her blog Chocolate Log which as the name suggests is dedicated to all things chocolate and chocolaty.

Anyway, not only were theses brownies tempting me, I had planted the idea of these sweet bites in my husbands mind. For the past few days, I have been promising and teasing him that I would make them especially as we had all the ingredients at home, but they were not coming out of the kitchen too quickly for him. So he prompted me early this afternoon 'Where are those brownies you promised me?!' Here is his piece - a heart, garnished with a little edible silver leaf. He is special after all. 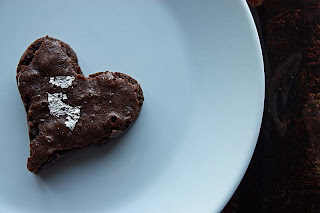 True to their words these brownies were easy peasy - not just to make, but to eat too.

I made these Chocolate Orange brownies with chocolate I was sent from 'Chocolate and Love' to try. Chocolate and Love bars are fair trade, organic, gluten free and suitable for vegetarians. They have a number of bars that are suitable for vegans too (always read the label). These brownies should have been made with 100g of chocolate, but D had managed to eat most of the Orange Mantra flavour leaving behind only 80g which is what I ended up using in the recipe. The chocolate is smooth and intense in flavour, not the kind you'd eat in one go, but slowly, piece by piece. I also have to add this is not the kind of bar you would go out and buy every-day as it costs around £3.20 a bar, but its worth a treat or as a gift for the chocolate connoisseur in your life. What I liked about it here was it worked well in this recipe, the zesty kick of the orange still came through every bite of the brownie. It the kind of chocolate I'd be happy to use in my baking. 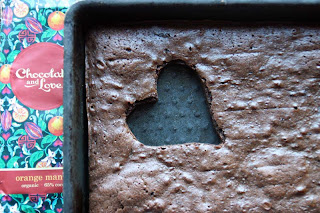 Chocolate Orange Brownies
Makes 1 x 7 inch by 9 inch tin
Ingredients
100g unsalted butter
100g (I only used 80g as that is all I had) orange dark chocolate
150g dark muscovado sugar
2 medium eggs.
75g plain flour
1/2 teaspoon cinnamon
Pinch of salt.
MethodHeat oven to Gas Mark 4.
Melt the chocolate, butter and sugar in a bain marie (or a bowl suspended over a pan of simmering water). Remove from the heat and allow to cool a little, then beat in the eggs.
Stir in the flour, cinnamon and salt. Pour into the tin and bake on middle shelf for 12 minutes. Allow to cool in tin before slicing up and serving. 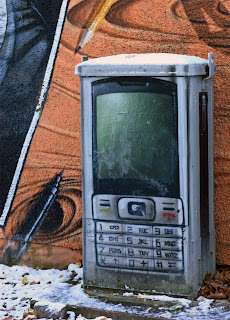 Here are some more photographs from last weekend. These were taken around Kelvinbridge, not far from Kelvingrove Park and Glasgow University. Its known as the Kelvin Bridge mural, a panoramic patchwork depicting various modes of transport. 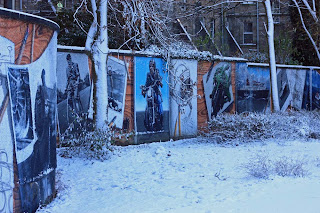 I've seen the mural from them distance many times before, when I used to the University, but never up close and personal. We were very impressed by them all, but photographed only those that amused us the most. 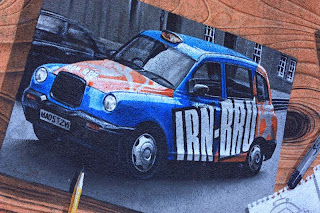 Irn Bru - Beloved by some Scottish folk. Instead of having a cuppa tea or a coffee in the morning to get you ready for the day ahead, you will often witness people drinking straight from their large bottles of Irn Bru. Phenomenal! I actually don't mind it, I grew up in Wales and it was a fizzy drink that featured in my parents household on party days, along with Tizer and Lilt. 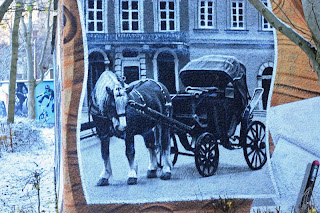 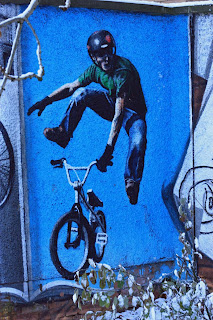 I read that there are some more murals further down, so may have to visit again. I don't need much of an excuse to visit the West end of Glasgow. 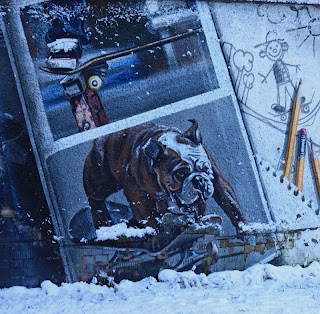